RamPage
Home YamPage Excess COVID Relief Funds to be Used for Italian Tiles in All... 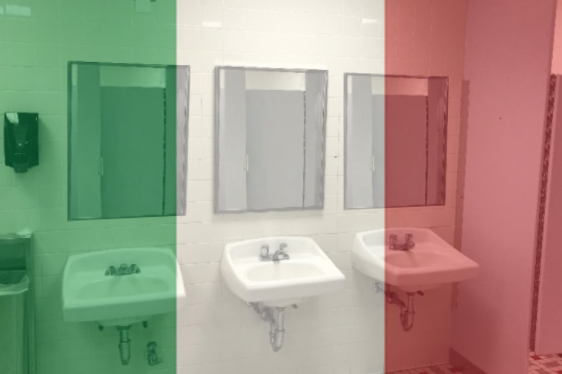 FEBRUARY 18— After receiving additional funds from the federal government, the J-D school board and administrators are debating what to do with the additional money. Some believe that school lunches should remain free for the next few years, others believe that teacher salaries should be increased, and some believe that hiring more custodians to keep the parking lot clear in winter would serve the community best. But the overarching belief from the administration lies in a completely different place.

“Let’s look at what makes J-D different,” Mr. Gasparini said in an interview with us. “It’s not just the diversity of the clubs and electives, but also the imported Italian tiles hand-cut by an elderly Italian man named Giuseppe in the Red Hall bathroom closest to my office. This level of cultural awareness is what truly separates J-D. Myself and some of my colleagues believe that it is time to extend this campaign to the other bathrooms in the school.”

Although it may seem unnecessary at first glance, Italian tiles in all of the J-DHS bathrooms actually help everyone, including the economy. “Think about student morale,” Mr. Gasparini said in a follow-up. “I haven’t had a complaint about the bathrooms in years. To be more specific, I haven’t had a single negative comment on the Red Hall bathrooms since March 18, 2020.” In addition to this, because the tiles are imported, J-D is actually contributing to improved relations with Italy. Students from all grades hope these relations lead to better pizza for lunches.

Committed to diversity, inclusion, and equity, the Board Of Education couldn’t possibly find a better use for the federal funds. According to the school board, J-DHS cannot increase the state of only one of the bathrooms, and it was “only a matter of time” until Italian tile reigned supreme. Based on construction plans we obtained, it looks like the Green Hall bathrooms are first on the radar, followed by the Blue Hall. According to a note written on the plans, the bathrooms on the other side of the Red Hall are last because “they have already seen the effects of the privilege of having Italian tile.” While we’re not too sure if that’s how it works, math teacher Mrs. Huyck assured us that PEMDAS cancels it out. Because J-D needs more construction in the building, the first re-tiling will occur later this month. Although students may not notice it because half of the bathrooms are locked anyway, their morale will be boosted once they see where J-D’s COVID relief funding went.

Freshmen and Sophomores in the Musical Take Action to Relate to...