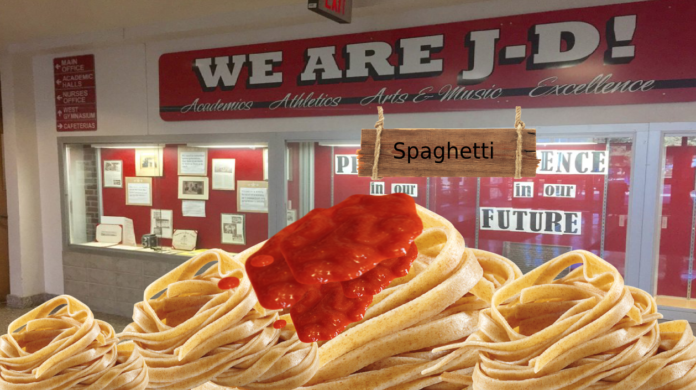 DeWitt, NY — It was a normal Thursday afternoon at JDHS. Students were bustling to their all-too-late 5th period lunch as the weekend became closer and closer.

However, as students began turning the bend into both cafeterias, a strong smell of Italian-ness was present – all four walls of both rooms were inundated with freshly cooked, al-dente spaghetti. One would’ve probably asked why the staff at JDHS had decided to throw an impromptu food fight, but it became clear that was unnecessary when an all-knowing student yelled out “Does this mean that the tiles are really Italian?”

Yampage, being the pinnacle of investigative journalism, again took to the halls of JD to investigate this very interesting question. Immediately looking to Principal Paul Gasparini for a comment, it became obvious that the school was, in fact, pleased with this outcome: “We take pride in our tiling,” said Gasparini in an interview with Yampage staff. “The decision was made on a district level by Mr. Smith to import tiles from the tiny island of Crete, where artisan workers are known for their expert craftsmanship.”

When asked about the spaghetti incident, a smile was quickly cast across Gasparini’s face, “We were aware of the possibility that this might happen when we purchased the tiles,” he said as he took a gulp of the freshly cooked pasta right in front of us; “In fact, we also purchased several rakes and buckets to harvest the goods. Expect them to make it to your lunch trays very soon.”

Until then, Yampage was glad to have answered this question that we know was on everyone’s mind. And while tomato sauce may stain the cafeteria’s walls for weeks to come, we can only hope that more shapes may soon appear – spaghetti is bound to get old very quick.

Aveline Chocolat - December 20, 2019 0
One parent of a freshman attending the concert said, “I’ve only been to Dessert Concerts in the JDMS cafeteria, so I was understandably nervous for swanky high school choral concerts, but when I tripped on the carpet walking to my seat, only to find a piece of chewed gum and ‘we are not JD’ carved into the arm rest, I felt as though I had found my home.”