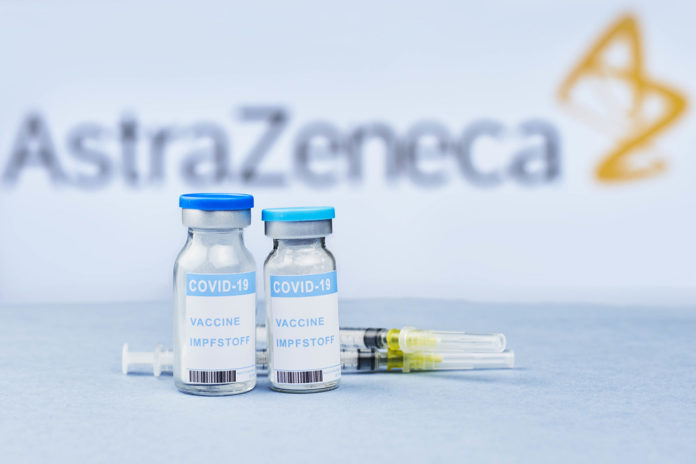 While the Oxford/AstraZeneca COVID-19 vaccine is not yet approved in the United States, it is the prominent vaccine in Europe, and it is one of the most widespread COVID vaccines in the world.  The official name of the AstraZeneca vaccine is ChAdOx1 nCoV-19.

Unlike the Pfizer and Moderna mRNA vaccines, AstraZeneca took an adenovirus (cold virus) from a chimpanzee.  They modified it so it cannot replicate and infect humans.  They also modified it to carry the spike protein DNA.  This vaccine works in a similar way to the Johnson & Johnson vaccine.  To read about how both of these vaccines work, click here.

Early research probably suggested that two doses would be better for the AstraZeneca vaccine, even though this vaccine works much the same as the Johnson & Johnson single-dose vaccine.  It is not conclusively known (to the public) why two doses are used.

There were four separate observer-blinded trials: two in the U.K., one in Brazil, and one in South Africa.  The only published report on the safety and efficacy of the vaccine was published in The Lancet, in which the results of one of the U.K. trials and the Brazil trial were combined.  These two are three-phase trials.  The other two studies that were not selected are mainly focused on dosing and safety, not efficacy.  The safety, however, is being reported from all four studies.  The Lancet article reports on findings from April 23, 2020 to November 4, 2020, before the trials were concluded.  The trial furthest along at the time was the one in Brazil.  A small number of participants in the trials (1.3% in the U.K. and 2.3% in Brazil) tested positive for COVID antibodies (seropositive), meaning they had previously had the virus.

Out of the 11,636 participants in the two selected trials, 5,807 received two vaccine doses, and 5,829 received the meningitis vaccine as a control.  They used the meningitis vaccine as the second group to test if any stimulus to the immune system could protect against COVID, or if only the vaccine would be protective.  86.7% of participants in these studies were aged 18-55, and the rest were older.

In the first of the two U.K. studies, the participants were accidentally given a low dose for their first vaccine dose.  When they opened up the trial to older people in the second U.K. study, they also fixed the dosage.  They still reported their findings from the patients who got a low first dose and a standard second dose.  Because the population studied were overall pretty young, the rates of underlying conditions among participants were low.

131 total cases occurred among participants in the combined U.K. and Brazil trials.  30 of them occurred in the vaccine group, and 101 were in the control group, equating to an overall efficacy of 70.4%.  Interestingly, the efficacy was 90.0% among the LD/SD participants, and just 60.3% among SD/SD recipients.  The vaccine was indeed more effective by far than the meningitis shot, which was approximately as effective as a placebo would have been.  As days since the first and second doses increased, there was more protection given by the vaccine.  Because the patients were young and had very few comorbidities (underlying conditions), less than 20 total participants in the two studies (combined) were hospitalized, and virtually no one had a severe infection.  The two that had severe cases were in the control (meningitis shot) group.  There was little variation in the results among subgroups such as race, gender, and ethnicity.

As stated earlier, safety was reported from all four trials, and efficacy just from two.  While there was the meningitis shot as the control in the two studies used to determine efficacy, one of the other two trials had a saltwater placebo.  175 serious adverse events occurred in 168 participants in all of the four studies combined, 79 of whom received the vaccine, and 89 of whom received the meningitis vaccine or saltwater placebo.  Only three of these were found to be related to either the meningitis shot or AstraZeneca vaccine, and the others were found to simply be random medical events.  A certain type of low blood count occurred in the U.K. control group, possibly related to the meningitis vaccine.  Three cases of inflammation across the spinal cord occurred, and it seems this may or may not be a result of the AstraZeneca vaccine.  Two of these occurred after the COVID vaccine, and one occurred in the placebo group, although one of the vaccine group cases occurred in a patient that had previously suffered from multiple sclerosis.  A panel of neurologists was brought in, but it remains unknown whether the vaccine caused the third instance of this condition.  There was also one case of high fever in the South Africa safety trial that was reportedly likely to be vaccine-related. The EU’s European Medicines Agency (EMA) is now investigating data provided by AstraZeneca about Guillain-Barre Syndrome (GBS), after an unknown number of cases were reported following vaccination. GBS is a nerve disorder that is a common result of several vaccines, so it is not particularly concerning that the AstraZeneca vaccine may cause GBS in rare cases.

The AstraZeneca vaccine is safe and effective overall, and it will likely be approved in the U.S. once AstraZeneca applies for FDA emergency use authorization.