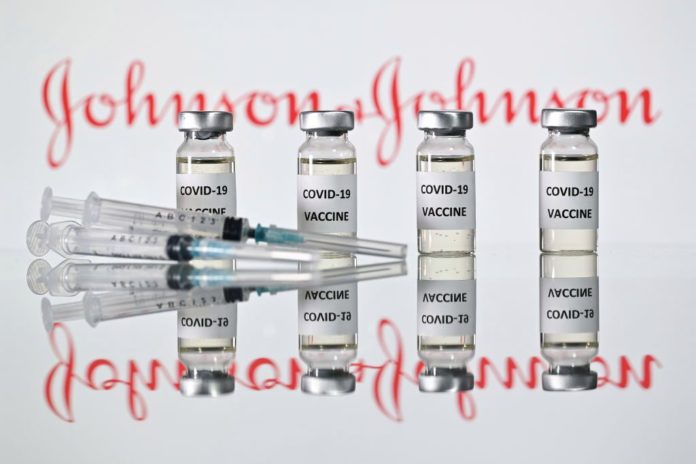 A virus is lipid and proteins surrounding genetic material.  J&J has taken adenovirus, a common cold-like virus, and modified the genetic material.  Normally, adenovirus just has cold genes in it (runny nose, etc.).  They used the particle as a delivery mechanism for the vaccine, because the common cold virus is really good at getting into human cells.  This way, the vaccine can easily get into human cells.  They modified the adenovirus’s DNA to include some DNA from the coronavirus.  Not just any DNA, but the DNA that encodes the spike protein.  COVID looks similar to the adenovirus.  It has a coat, binding proteins on the outside, and genetic material on the inside.  All viruses are like this.  The coronavirus’s binding protein is the spike protein.

The immune system makes antibodies, proteins which coat and bind up specific targets, so they can’t do what they want to do.  If someone gave COVID to someone who is vaccinated, their body would stop it, because they have antibodies that would glue themselves onto the coronavirus, and keep it from attaching to the cells.  The antibodies gum up the viral surface with antibodies.  Vaccines prepare the body with something like the virus. The body learns how to fight it and makes antibodies.  These antibodies are ready to be deployed if the real virus enters.  If this person was not vaccinated, their body would not recognize the spike proteins as being dangerous.  People that have had COVID lose their antibodies over time, hence why they could get it again.

There were approximately 40,000 participants in the J&J vaccine observer-blinded trial.  About 40.9% of participants were from Latin America.  South Africa accounted for 15% of participants.  44.1% were in the U.S.  Out of the 40,000 patients, 9.6% of them had contracted COVID in the past.  87.5% had no antibodies.  For the remaining 2.9%, researchers did not know the antibody status.  The median age was 52 among participants.  The average body mass index (BMI) of participants was 27.0, which is slightly obese, putting them at greater risk for COVID.  40.8% in each group had at least one preexisting condition.  A small number of people who signed up for the trial initially were unaccounted for by the end of the trial, which is standard, although it is unknown why they were unaccounted for.

Approximately 60% of vaccine recipients aged 18-59 experienced pain at the injection site, compared to about 35% in those aged 60 and above.  Placebo recipients also reported some adverse effects, but to a lesser degree.  Redness and swelling in the arm were very low.  Out of systemic events (full body), the most common adverse effect among vaccine recipients was headache (35%), followed by fatigue (35%), body aches (30%), nausea (15%), and then fever (5%).  Side effects were consistently more prevalent in those aged 18-59 than those 60 or older.  No meaningful differences in vaccine efficacy were recorded among sub-groups, including sex, race, or ethnic group.

The J&J vaccine is a step in the right direction.  Many people like the one-dose method, and getting another vaccine approved and distributed across the globe just gets us one step closer to building herd immunity against COVID-19.

Dropping Acceptance Rates: Yet Another Stress Factor of College Admissions