RamPage
Home YamPage Who Let the Cats Out? 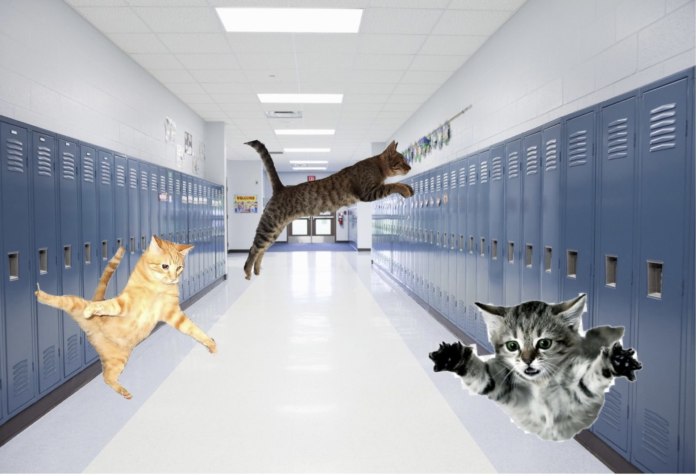 Last Tuesday, students were sent home mid-day due to a series of unfortunate events. Teachers were left in complete and utter shock when, in the middle of their lessons, cats came into the classroom. Yes, feline cats. Some are calling this the “cat attack.”

Due to dozens of cats roaming both floors of the building, Mr. Gasparini called for an emergency evacuation. This was meant to get not only the students to safety outside, but to get as many felines out of the building as possible. Students were instructed via overhead speakers to “fend for themselves, avoid all cats, and run to the nearest exit.” They were then told, “The more disorganized the better.” We can only imagine how this went.

Many students, like Muhammed Abdel, found themselves unable to abstain from petting the cats. In the end, some of these students regretted their decision once they found out these cats were not only rabid, but also carried numerous diseases. Abdel disagrees by telling Yampage, “The cats were cute, so it was worth getting rabies. Thanks to Toast Malone [what he named the cat], I don’t have to go back to school.” The real question is – well, there are a lot of questions. First of all, why are students naming rabid cats? Second, is in-person school really worth a hospital visit? But Abdel wasn’t the only one that decided to ignore the rules. After numerous students ended up in the hospital, a statement was put out that all students who did not follow directions and petted the cats were banned from school lunch.

But what did this cat attack mean for students with cat allergies? A science teacher that shall remain unnamed for the purpose of their job tells us, “The halls were full of hormonal, sneezing teenagers. I even saw one kid charging $5 for a singular allergy pill. You know, rumor has it he made over 200 bucks!” They ended their statement by saying they wished they had thought of it first. Currently, there is an ongoing investigation to find out who the allergy pill dealer was and the school is determined to get to the bottom of this.

School administrators were unsure how to CATegorize this free half-day students had received to the point where the school board had to get involved. The board discussed adding a new category to the days off students receive during the school year; no longer would there just be holidays and snow days, there are now random cat attack days configured into the yearly schedule. The board’s vote decided that two a year would be sustainable.

The real question here though is, who let the cats out? How did dozens of rabid street cats get into a high school with locked doors at all times? After the DeWitt police concluded this as a closed investigation and left it unsolved, the Syracuse-based FBI stepped in to reopen the case. They said a federal offense like this cat attack could potentially get the convict a life sentence in jail.

For now, all students are being questioned to see if they know where these cats came from and, ultimately, who let the cats out.

Tretyakov Dmitriy (Dima) Stepanovich - January 24, 2022 0
If you also want to sound cool, just google “obscure genres of music” and you’ve got yourself a whole new personality!

Intrigue and Inconvenience: The Effects of the Blue Hall Construction