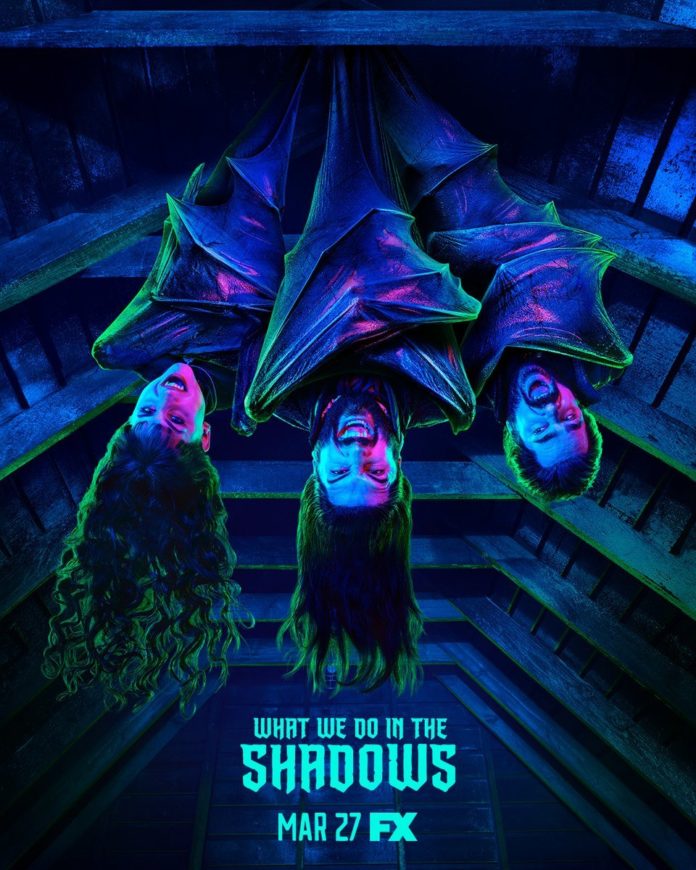 The season three premiere of FX’s hit mockumentary series What We Do in The Shadows was released earlier this month, and the horror-comedy is off to a strong start, despite a few small missteps.  The series, based on 2014’s film of the same name, follows four vampires and their familiar (essentially a vampire servant) living in a small Staten Island apartment. The band of misfits consists of Nandor (Kayvan Novak), Laszlo (Matt Berry), Nadja (Natasia Demetriou), energy-sucking vampire Colin Robinson (Mark Proksch), and their kind hearted familiar Guillermo de la Cruz (Harvey Guillen).

At the end of season two, Guillermo discovered that he had excellent vampire-slaying powers and was the descendant of vampire hunter Abraham Van Helsing. Meanwhile, the vampires were invited to a prestigious vampiric event. When they arrived, they were captured and brought on stage to be executed due to the accidental death of a high ranking vampire who was staying in their home. Before they can be killed, Guillermo arrives and kills all of the vampires at the event, saving the group.

The season three premiere starts off with Guillermo trapped in a cage by the vampires as they attempt to decide whether they should kill him or let him live after his slaughter at the event. It’s revealed that he is actually able to get out of the cage very easily and has been doing chores around the house while the vampires are asleep. One day, the mysterious guide for the Vampiric Council arrives and proclaims that the vampires are now the rulers of the Vampiric Council. With this in mind, the vampires decide to let Guillermo live and make him their bodyguard.

The first episode starts off a bit slowly while explaining what happened in between this season and the last, but manages to regain it’s form later in the episode. The season hasn’t quite hit its stride yet, but it’s still a great time. Season two was hilarious, with clever running jokes and the critically acclaimed episode On The Run (better known to fans as The Jackie Daytona Episode). Season three, however, feels like a bit of a step down so far from the constant humor of season two.

Guillermo (Guillen) has been the heart of the show since the very first episode, and is easily the most likable character. This episode centers around him, and you can’t help rooting for him. The series has always blended comedy with more heartfelt moments, and the episode is no exception. Guillen imbues Guillermo with such kindness and likability that he carries the episode.

Oddly enough, the premiere episode didn’t use Laszlo (Berry) as much as it has in previous years. The Shakesperian romantic is quite possibly the funniest character on television right now, but his appearances in this episode were limited to a couple of quick one liners and standing in the background. Perhaps creators Taika Waititi and Jemaine Clement are saving him for bigger moments later in the season, but in the premiere, he had an unfortunate lack of presence.

The show’s other main characters were as funny as always. Nandor (Novak) brings a certain charm to the show, almost making you feel bad for the socially inept vampire. Nadja (Demetriou) is as charming as always, and continues to be one of the funniest aspects of the show. Colin Robinson (Proksch) is delightfully boring, and helps the show maintain it’s awkward tone at times. He didn’t have any bits quite as funny as he did in previous seasons (like summoning his dead grandma so he could tell her a, “What’s updog?” joke).

That being said, this episode was a bit light on the jokes compared to other seasons. The first ten minutes or so are spent recapping last season’s events and the necessary exposition for the beginning of this season. It was less of the rapid fire wittiness of other episodes, and more jokes added in to lighten up story moments. The jokes don’t quite hit the same heights as always, but they still provide laughs.