RamPage
Home News Local What is Going on With the Construction in Downtown Syracuse? 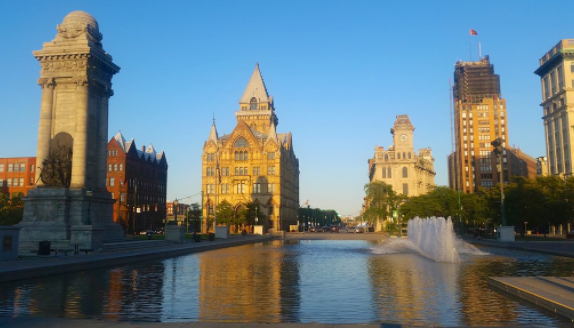 In case you haven’t been downtown recently, nearly every major street is undergoing considerable renovation. The city has been replacing old water pipes before repaving the streets, and due to this, there have been many road closures and numerous detours. In addition, National Grid and Verizon are taking the opportunity to upgrade some of their infrastructure under the roads. Multiple Syracuse locals have explained their annoyance at the project, as driving through the downtown area “has been a nightmare.”

Surprisingly, the COVID-19 pandemic has had no major impact on the project’s timeline of being completed, but it has assisted in cutting down vehicular and pedestrian traffic. This ultimately reduces the roadwork interruption. Syracuse Mayor Ben Walsh says the city is repaving more than 20 miles, but progress has been significantly slower than expected because of the pandemic.

Pedestrians have expressed their emotions regarding the construction by saying they feel threatened by bulldozers being used while they’re driving, and concerned for possible debris that could damage their cars. Objects placed on the roads for construction have also been reported but it is unknown if these objects are to prevent speeding or to assist the project.

One store owner says that sales have been down about 50% since the start of the construction. “It’s actually been worse than COVID; I did more business during COVID than I did during road construction,” Scholar and Champs owner Ben Aufsesser says. He expresses his concern by saying, “It’s been a real hindrance to businesses; they blocked both sides of the street. In some cases, you can’t drive down the street at all so it’s been really, really bad.” In addition, inability to access certain streets downtown by cars has hindered many other businesses located in the downtown area.

When asked her opinion on the complaints from pedestrians/business owners, Syracuse’s Chief Operating Officer, Corey Dunham states “I certainly understand the frustration of some business owners and people who work or live downtown (I’m one of them!), but we’re asking those affected by the construction to keep the long-term in mind. We’ve done everything we can to minimize the disruption and have been very transparent as construction has progressed throughout the spring, summer, and fall. We’ve held bi-weekly meetings with the Downtown Committee for anyone who wants to join in order to discuss progress, next steps, anticipated timelines, etc.” Dunham then brings up, “For those unable to attend in person, these meetings are viewable on our website along with maps and other materials at www.syrgov.net/infrastructure.” Another reason why the construction seems to have taken longer is because a “Dig Once” approach is being attempted. Meaning that when timing and resources allow,  infrastructure underneath the roads (water, sewers, etc) are to be repaired or replaced to try and avoid having to cut into a freshly paved road in the near future.

“The first is the State and Salina Street Mill and Pave. The work on Salina Street goes from MLK Boulevard to N. State Street, and the work on State Street goes from MLK Boulevard to James Street. The second project is referred to as the Downtown Mill and Pave. This project includes Clinton Street (from W. Genesee Street to Jefferson Street), S. Warren Street (from Erie Blvd E. to S. Salina Street), Jefferson Street (from S. Clinton Street to Montgomery Street), and Montgomery Street (from Erie Blvd to E. Adams Street),” Dunham states. The reason for the specific selection of streets in such a busy and heavily traveled area is due to the poor conditions of the roads. This is ultimately what made the project eligible for upwards of 14 million dollars in federal funding by the Transportation Improvement Program (TIP), which works through the U.S. Department of Transportation. Specifically, The Salina and State street project was awarded 9,721,230 dollars, and the Downtown Mill and Pave was awarded 4,102,669 dollars in funding.

Chief Operating Officer Corey Dunham voices that most of the work is scheduled to be completed by the end of the year, but depending on how soon winter arrives, it could continue into 2022. The reason for the work being completed now is largely due to the fact that the federal funding comes with a deadline of when the project must be completed. Dunham reveals, “Yes, there are certain deadlines the City needs to meet once the project begins. Once NYSDOT (New York State Department of Transportation) approves the Plans, Specifications, and Estimate (PS&E), the City has the go-ahead to begin advertising the project. As a rule, the project should be advertised, consultant selection begun, or work started within 90 days of that step. The City must then begin and continue submitting bills within six months of each phase authorization.” If the funding is not spent in a timely manner, the city is put at risk of not receiving additional funding in the future.

As winter is slowly approaching in Central New York, Syracuse citizens can only hope that all of the construction is completed before 2022. Not only to prevent any further inconveniences, but also so the roads are freshly paved, in turn, making it easier to drive when the ice freezes over the pavement in winter months.