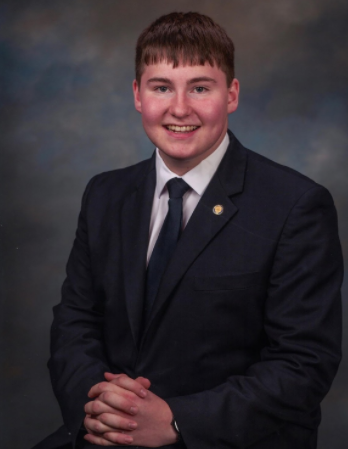 J-DHS senior Max Mimaroglu was elected last spring as student representative of the J-DCSD Board of Education.  He serves as a link between the students of J-D and the board members, representing the opinions of his fellow students.  His goal is to “have a more direct line between students and the board.”  Pertinent issues being discussed at board meetings include the school resource officer (SRO) position, the return to high-risk sports, and the imminent return to full in-person education.

The position of the SRO at J-DHS has been up for debate for months now due to recent sentiments regarding police brutality and the role of police officers in schools.  J-DHS SRO Lindsey Pienkowski has been with the district for years, and she has never needed to break up a fight or draw her gun on school premises.  However, with the recent distrust of police officers after the death of George Floyd, Breonna Taylor, and more, J-D is debating whether to keep Officer Pienkowski as the SRO.  “The SRO position is still under some debate with, in all likelihood, another vote coming up on the issue at the March 15 board meeting.  The last vote failed in a four to four tie with one member absent,” says Max.

J-D plans to transition to five-day-per-week in-person education when possible, and they have already reintroduced high-risk sports such as football.  Mimaroglu shared his thoughts and concerns on these issues: “I addressed many of my concerns about high risk sports when the vote on that occurred two meetings ago, I believe.  It comes down to the question: How do we make sure that all our students are safe physically, mentally, and socially.  We also must look at our community as a whole and make sure we are keeping them in the loop.  As for the transition back to school, this is not a board decision and, from my understanding, will be determined by Dr. Smith.”

Mimaroglu has not received any complaints from students whose voices have not felt heard.  This suggests success in his position, because a main point of his campaign was to voice the opinions of students to board members who can act upon them.  According to Mimaroglu, “I have helped amplify the voices I’ve heard, but again I don’t think my opinion on my effectiveness is the most valid one.”  Mimaroglu believes that the best way to gauge his effectiveness at making the voices of students heard is to hear from students themselves.  If any J-D students have issues they would like to bring up to the board, they can contact Mimaroglu at 21mmimaroglu@jd.cnyric.org

FDA Approves First COVID-19 Pill and is Expected to Approve a...