RamPage
Home Culture To All The Boys: Always And Forever, A Near Perfect Ending to... 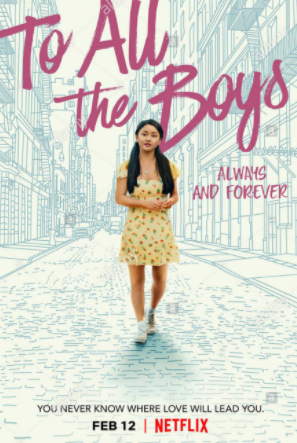 To All The Boys I’ve Loved Before first gained fans in the book series by Jenny Han made up of three books released in 2014, 2015, and 2017. The series follows shy and reserved teenager Lara Jean Covey who writes love letters to all the boys she has ever had a crush on. Her little sister Kitty finds the letters and sends them out to each of the boys which is where the love story between Lara Jean and lacrosse stud Peter Kavinsky begins. Fans went crazy for the first movie in the series that dropped in the summer of 2018 and loved the on-screen romance between Lana Condor who plays Lara Jean and Noah Centineo who plays Peter Kavinsky. The second movie To All The Boys: PS I Still Love You was also a big hit on Netflix and a year later fans now have the final movie To All The Boys: Always And Forever.

The third movie showcases Lara Jean in her senior year when she returns from a family trip to South Korea and considers her college plans with and without Peter. There is definitely a lot to take in with this final movie. It is somewhat bittersweet to see the final moments of Lara Jean and Peter’s relationship and their last high school experiences before leaving for college. But compared to the other movies, this one did not really hit the mark for lots of fans.

With having the first two movies be such big hits, fans had very high expectations for the closure to the series. Overall, the storyline was a little bit predictable when following the conflict Lara Jean faced between getting into Stanford to go to college with Peter or following her newfound dreams and going to NYU. As a fan, it was a little bit annoying to watch Lara Jean go back and forth with trying to please her boyfriend or try a new experience. It got a little bit old to see her trying to chase her high school boyfriend because it was just a little bit unrealistic. Also, lots of fans think that Noah Centineo is too old to be playing a high school senior because he is 24 years old. Nonetheless, the relationship between Peter and Lara Jean is something all teenagers are jealous of which is why the movies are still so successful.

Although this movie did not compare to the other two, there were still so many moments that fans loved. Seeing Lara Jean and her family take a trip to South Korea to relive her late mother’s memory was heartwarming. Also, the sister dynamic between Lara Jean, Margot (played by Janel Parrish), and Kitty (played by Anna Cathcart) is so fun to watch because they all take care of each other but also know how to have fun. Another thing fans loved about this movie was that the events from the first movie really came full circle. The character development of Lara Jean from the beginning to end shows how she became more confident and grew into her own through her multiple relationships that occurred through the sending of the letters. It was also a happy ending to the trilogy and even though there will be no more movies, it ended in a way that made all fans content.

Overall, the movie To All The Boys: Always and Forever is a near perfect ending to the contemporary romance novel series To All The Boys I’ve Loved Before.

The Northman Is a Brutal Epic That Runs an Hour Too...

The Monster We Fear Resides Within Our Own Mind