RamPage
Home YamPage The Woodwinds Take Over The Fitness Center 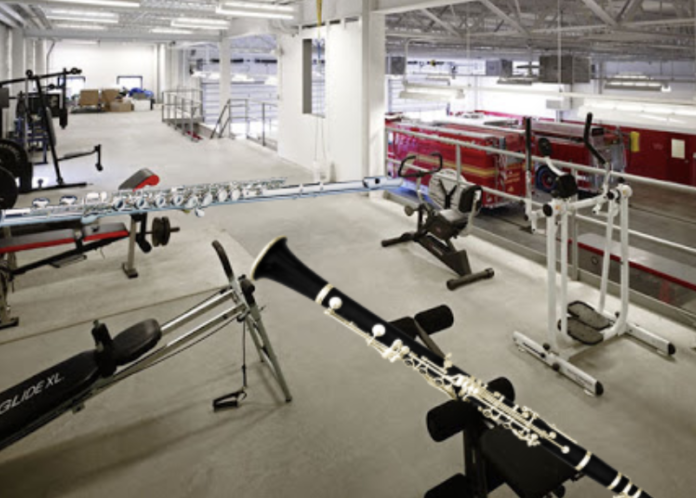 Last Thursday, a very odd gathering was seen inside the high school’s fitness center. Later identified as the flute and clarinet section of the concert band, this group was “getting swole” inside.

“Being a musician is difficult by itself, but when you have to hold these heavy instruments, like say a flute or clarinet, it becomes quite a workout. We really deserve a gym credit for it,” Lily Dovciak, a flute player in the band, told us.

After bribing football coach, Mr. Ormond, with a signed note from the commissioner of the NFL promising JD Football a state-level victory next season, along with a box of donuts, the upper woodwinds overran the fitness center and started working out.

In hopes of increasing their lung capacity, many of the musicians took to the treadmills and we even spotted senior clarinet player, Colby Porter, working on “Flight of the Bumblebee” and then jumping on the treadmill. The results of this experiment will remain confidential for the privacy and the dignity of said student.

Others spent their time bench pressing or lifting weights, hoping to improve their upper body strength. Many students were even seen hanging instrument cases off the ends in place of the circular weights.

To say the least, the football team was outraged by these turn of events.

“How would they like it if we took over their band room? Let’s bribe Mr. Blumenthal with a box of donuts, we’ll see how they like it,” one football player told us with flames in his eyes. “Those dumb musicians deserve what’s coming to them. Them and their awful music, putting me to sleep. They can’t expect to just steal our space without a fight.”

Meanwhile, saxophone players huddled in a group by the fitness center’s door, playing “Careless Whisper”, with hopes that the beautiful melody would eventually lure the musicians to the exits before the football players began their attempts at reclaiming the spot.

“This could be the beginning of World War III!” saxophone player, Maggie Frank, warned us fearfully. “There have been threats of war flying back and forth since this began an hour ago. All I can do is serenade them with George Michael in hopes that my fellow musicians will come to their senses.”

With flutes and clarinets weighing only one to two pounds, we had to ask the woodwind players why they thought they needed to strengthen their upper body. Was this really worth it?

“Have you ever carried a flute to and from school every day? It takes a physical toll on your arms,” flutist, Sabina Muradova, told us. “And then in class, you have to hold the heavy thing up for over an hour. War or no war, our arms deserve a chance!”

Later, we informed Mr. Blumenthal, the band director about this event. All he did was laugh and say, “Well, if they’re not going to practice those instruments, at least they’re taking steps towards being able to hold the things.”

Aveline Chocolat - September 15, 2021 0
“My mom won’t let me watch ‘Daniel Tiger’ any more,” one five-year-old reported. “I told her that cancel culture has gone too far and that you have to separate the art from the artist.”