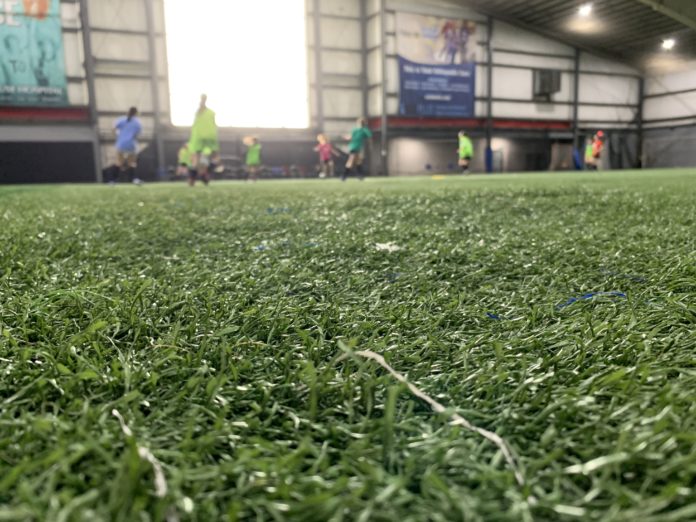 At age 11, most kids are still playing with plastic cars or dolls. However, a select few have locked up their toy chests for good and bought a pair of cleats that will carry them through games, training camps, and even college showcases. Every year, more and more college commitments are made by kids that are 14, 13, or even 11 years old. Olivia Moultrie was 11 years old when she accepted a college scholarship to play soccer at the University of North Carolina.

Moultrie is now 13 years old and has turned down her scholarship at UNC in order to play professionally in an agreement with Wasserman Media Group and Nike. FIFA does have a rule, though, that prevents athletes from playing in foreign clubs until they are 18, so she will not be playing internationally until then. Although Moultrie’s situation is very unique, similar stories have popped up all over the country. Two brothers from Minnesota named Chaz and Cruz Lucius  committed to play college hockey at the University of Minnesota. They are 13 and 14. Not unlike this, 14 year old Nick Heras has moved across the country in hopes to pursue a career in football. His parents pay $50,000 a year for him to continue training. Although many may approve of these practices, there are a number of reasons why early commitments are unhealthy for young athletes.

These commitments may seem like win-win situations, but in the long run there are not many real benefits for the athletes. Often times it “takes away” the childhood of the younger kids or adds unnecessary pressure to others. In order to play at the college level, an athlete must have had enough practice playing at the varsity level, and many athletes that have recruited early have not gotten enough of this necessary practice. If they were recruited when they were 11, they may not have been able to play at the varsity level at all. According to Wbur, there was a study that proved just how incredibly hard it is to predict an athlete’s talent at such a young age. Players can improve or worsen as time goes by, so it can be hard to tell whether a player will still be amazing in 10 years or not. These early commitments can shove athletes into a box that they often times can’t get out of, especially if their parent was pushing for an athletic career for them more than they were. It’s also very common for the athletes to get burnt out on their sport before they even head to high school. They might lose the joy that sparked in them when they first put on their jersey before a game. What if they didn’t want to play anymore?

“What if they didn’t want to play anymore?”

Although there have not been too many cases of this in Jamesville-DeWitt High School, senior Ana Dieroff did commit to playing lacrosse at Yale University when she was only a sophomore. She committed the November of her sophomore year (2015), and said that although it was early, it was a huge relief. “I had been looking at colleges for a while… I was between Cornell and Yale,” Dieroff stated. Unlike others in her position, Dieroff knew she wanted to go to a school like Yale before she even started looking at colleges, so she didn’t regret her early commitment. “I think I’m going to the school that I ultimately would’ve ended up at, anyway,” she said. Even though Dieroff does not regret her decision, she does agree that early commitments can be bad. “It can be stressful at such a young age,” she added.

In an effort to prevent what happened to Dieroff to happening to other athletes, the National Collegiate Athletic Association (NCAA), has put a rule in place, stating that college coaches can not contact high school athletes until Sept. 1 of the athlete’s junior year of high school. According to the Next College Student Athlete (NCSA), This rule was put in place just after Dieroff made her commitment. The hope for this rule is that it will help end the cycle of early commitments in the future, and for that it is a step in the right direction. Dieroff shared her opinion on the topic. “I’m glad they put this rule in place… my [commitment] was so different,” she said.

“It can be stressful at such a young age,” she added.

Alas, there are good and bad sides to almost everything, and this does include early college recruitments. For many athletes, school does not come as easy as scoring the game winning goal. A student and their family’s only option of getting to college may be through an athletic scholarship, and the earlier they lock it in, the better. A very common reason could also be because an athlete wants to play professionally, and they may start their professional career with an early college scholarship. And of course, not all athletes are going to get burnt out. Some love playing their sport so much, that they would lock in playing it for four more years in college as soon as they could. For many it’s simple: they love a sport, and want to play it for as long as they can. They don’t care whether they commit freshman year, or a day before the first college semester starts. They would do anything to get on that field.

The vicious cycle of early college commitments could be very hard to stop. If one college recruits the best eighth grader in Chicago, another might try to get the best seventh grader in California. The negatives of commiting at ages 14, 13, or even as young as 11, clearly speak for themselves. There is really no rush. The college process should be slow and leave the student-athletes feeling informed, not overwhelmed and scared that they are a freshman and still aren’t recruited to a college baseball team. Although there are several reasons why an athlete may find it necessary to commit early, there are really not many real benefits. After all, a kid should be a kid, not worrying about which school jersey they are going to be putting on next.

Travel is Essential to Learning

A Border “Crisis”: The Manufactured Problem Creating an Us and Them...