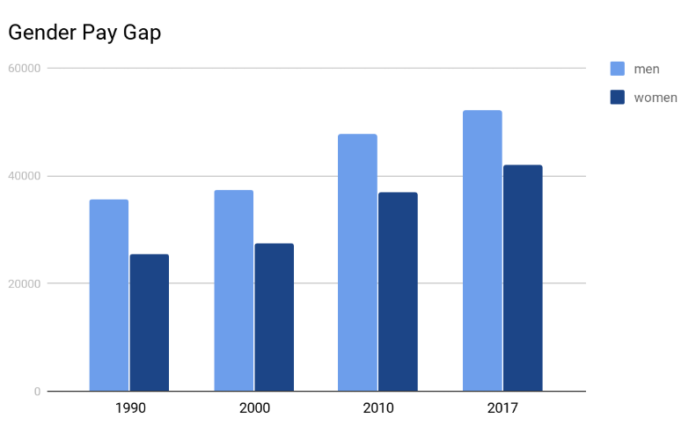 Gender equality has been an issue in the United States since America was founded. Women were always thought to be the stay-at-home parent, whose only job is to take care of the house and do chores. Although women have proved that they are very capable of doing much more than that, many women still think that they are not being treated as though they can.

Women have fought for their rights and have come a long way doing so. Little by little, women’s rights increased, starting with one women at a time pushing the boundaries, as they still are today.

One of the main places where women feel like they are being treated like they aren’t as capable as men, is in their workplace. According to the Pew Research Center, around four out of ten women say they have faced gender discrimination at work. For example, they were treated like they were not as competent and would get less support from their superiors as someone who was a man and was doing the same job, even though they have proven themselves to be perfectly capable.

In the United States, there is a big gap in the amount of pay women get compared to men. According to the The New York Times, equal work for equal pay is one of the top concerns for working women. According to the Business Insider, men get paid an average of 20 percent more than women, depending on what state you live in.  The Civil Rights Act of 1964 banned discrimination against gender in the workforce, yet pay is still not equal. This is unfair to women since they put the same amount of time and energy into getting a degree yet still are earning less.

Others may say that women don’t deserve equal rights. For example, New Hampshire state Rep. Will Infantine believes that men and women don’t get equal pay because men take riskier jobs and don’t mind working longer hours and outside in bad conditions. But this is not what women are fighting for. Women want equal day’s pay for an equal day of work.

Women have come a long way in society. They came from having to ask their husbands for permission to do just about anything to being able to run for President of the United States, but women still aren’t done fighting yet. Women will continue to push for complete gender equality in the United States, as well as other countries. Women have proved that they are strong and can make a change, even if it’s just a little bit at a time.

As the Influence of Politics Grows, Should it Influence Our Art?