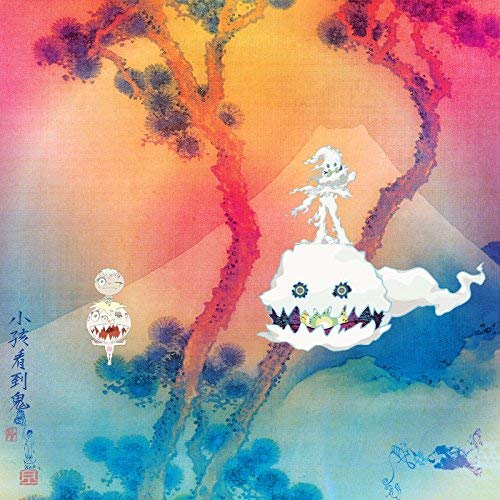 Among the recordings being Kanye West released weekly, the public received Kids See Ghosts, a joint project between Kanye West and Kid Cudi, on June 7th, 2018. Kid Cudi and Kanye West are no strangers when it comes to controversies and personal struggles. For instance, the majority of Kanye West’s career has included disputes sparked by the actions he committed himself, such as the infamous 2009 VMAs speech interruption. Along with these occurrences, Kanye endured a period of grief for the death of his beloved mother, resulting in the 2008 electro-synth album 808s & Heartbreak. The album is famed for its massive departure from West’s traditional soul-sampling style. In due course of all of these events combined, Kanye’s mental state fell upon itself during a series of nonsensical rants exclaimed during his 2016 Saint Pablo Tour concerts. At last in November of 2016, Kanye canceled his tour to be hospitalized for exhaustion, then to live incognito for the coming years. Besides West, Kid Cudi has found himself in a sunken place of his own. In 2016, Cudi announced publicly that he had been mentally struggling for quite some time and entered a recovery program to better himself. After getting back on his feet, Cudi returned in some form of his old self on Passion, Pain & Demon Slayin’.

Along with gathering aid from other individuals to overcome their struggles, the two artists have expressed their dismal notions through music. For one, the dreary instrumentals and gloomy humming and lyrics on Cudi’s first few projects encapsulate his personal hostilities. In fact, Cudi and Kanye collaborated on several other occasions other than on this joint project, including on 808s & Heartbreak‘s “Welcome to Heartbreak.” The end result of that album was a truly melancholy listening experience as a result of the spacy TR-808 drums which West’s sorrowful messages (with contributions from Cudi) layered with autotune backed. While the context of their past projects had highlighted their personal obstacles, no mentions of overcoming the hurdles that once slowed them did the artists reference.

For years, the following crowds of these artists have demanded a collective project like that of Kids See Ghosts. In 2011, Kanye did something alike Kids See Ghosts with Jay-Z through the collaborative project Watch the Throne. Before Watch the Throne, fans of Jay-Z and Kanye had been asking for a joint effort between the two for years. However, by the time the duo released Watch the Throne to the public, its peak desire among its audience was long overdue. Additionally, the reception of the product was mixed due to its cheap production and mailed-in verses. In the same fashion of Watch the Throne, the eagerness for Kids See Ghosts began about a decade ago. As expected, this collaboration between Cudi and Kanye at face value seemed to be an album that would perform better if it the two released it to consumers a decade ago. Yet when taking note of the context associated within the album’s seven tracks, the 2018 release of this album can be understood and ultimately appreciated.

In total, Kids See Ghosts consists of seven tracks clocking in at a succinct twenty-four minutes. With the album’s momentary duration of time, there is little to no room for filler. Sure, the subject matter on “4th Dimension” can be said to have no correlation to the main theme of the overall album. However, the track is revolutionary through its monstrous experimental beat composed of a straightforward sample of a Christmas song from the 1930s. Where the artists are not focused on conveying a certain message, Kanye gets a chance to flourish in production standards. Throughout Kanye’s career, each album has had its own distinct caliber, sonically speaking. Here, Kanye furthers that tradition by adding a lo-fi, humble, psychedelic, and experimental production era into his discography. Complimenting the innovative sound of the project is the universal gist of the album, being that these two artists have finally recognized and solved the complications that once plagued them from being themselves.

“Feel the Love” is the introductory song of the album. A confident verse from Pusha T over a minimalistic beat makes up the first half of the track, but the second portion of the track overshadows Pusha T’s already impressive presence. With the help of Kanye’s bombastic gunshot adlibs, Cudi comes storming in with a repeated refrain of “I can still feel the love.” The simple mixture of gunshots with that repeated optimistic line shines light upon the artists becoming free of the murderous thoughts imposed by themselves by seeking possible solutions. This subject is further established in the following track, “Fire.” Kanye delivers a verse discussing his ability to tune out the criticisms given to him by opponents, while Cudi touches upon his recent gain in faith for God. The true liberation from the pain that once tormented each individual comes on the track “Freeee.” The song is labeled as part two of “Ghost Town,” another track of Kanye and Cudi on Kanye’s most recent solo project, ye. “” includes each artists chanting “I’m ” on top of a grunge-inspired instrumental. Now released from their inner demons, the artists carry out their most heartfelt verses on the album on “Reborn.” The song is layered with grainy, emotional voiceovers for each artist, as well as consisting of an electrical organ loop and condensed, thick trap drums scattered throughout the exit with Cudi. The production gets the murkiest on the title track of the project, comprised of a continuous woodblock pattern with a low, grueling bass that drifts smoothly under the track. Furthermore, Kanye flows effortlessly over the instrumental, yet providing the track with strong passion. Lastly, the Kurt Cobain-sampled exit track “Cudi Montage” proves a full transformation of each artist through a social-conscious verse by Kanye that shines light upon gang violence that can only be solved by a superior power. Ingeniously, West raps, “Everybody want world peace/’Til your niece get shot in the dome-piece/Then you go and buy your own piece/Hopin’ it’ll help you find your own peace,” proclaiming that violence associated with such gang-related crimes are inspired in acts of vengeance. Going even deeper, it can be said that the malicious acts that occur within the current world will never stop because most of the stunts are done as a response to a detrimental personal experience. Adding to the closing track, Kid Cudi shouts “stay strong” to offer his sympathy for those who suffered the same setbacks he and Kanye once came across, now to be unshackled by their own monsters. The personal findings and transformations of these two artists throughout the album reaches completion as this final track ceases.

In its entirety, Kids See Ghosts is a solid project, but some unavoidable blemishes prohibit it from reaching perfection. An example includes the unfinished mixing throughout several songs. While the production sounds polished, the vocal quality of the artists sounds coarse, such as Kanye’s verse on “Reborn.” The substandard conditions of the mixing resemble the level of quality one would sustain during a demo recording. Furthermore, the twenty-four-minute runtime does not inhibit points where songs feel dragged out. For instance, as profound as Cudi’s exiting chorus on “Reborn” was, it crept on one too many times, which hindered the overall emotional draw into the song. Moreover, while the overall message is understood regarding the project altogether, the transition from song to song seems abrupt, for no one song is even approximate to another. Therefore, the cohesiveness of this album is deficient. In spite of these minor complaints, the project’s production, context, and execution remain superb.

Through Kids See Ghosts, Kanye West and Kid Cudi construct a brief, yet concentrated album that presents each artist in their most conscious mindset. The progression of the cooperative project tells the tale of both Kanye and Cudi breaking free from the psychological chains that once restrained them from reaching their fullest potentials. The chemistry between the two artists allows them to deliver the profound material found throughout the album. For instance, Kanye’s dismal and experimental production smoothly accompanies Cudi’s lavish preaches, while those same hymns assist Kanye to tranquility flow and broadcast each of his meticulous verses. In the end, the rapport displayed between both artists leaves the listener with satisfaction for not only the admiring level this project brings, but for the triumphant evolution Kid Cudi and Kanye West undergo from start to finish.

Movies and TV Shows to Look For on Netflix this May