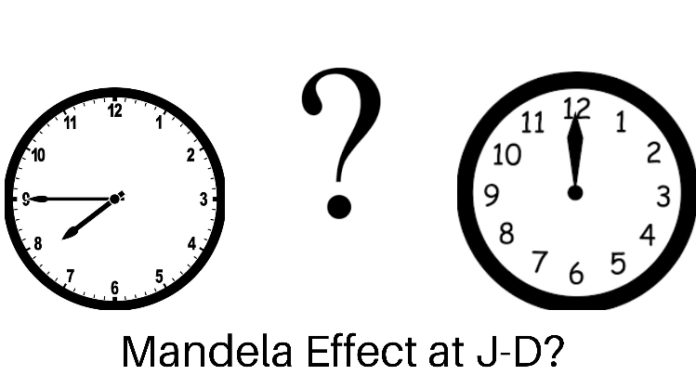 As students enter their third month without in-person classes, the memory of what school was actually like is beginning to fade.

The primary point of disagreement among students has been what time school used to begin. Junior Emily Ninestein thinks that it is impossible that class began at 7:45 in the morning. “The notion that over 800 students woke up and left for school before noon is absolutely ridiculous. I can’t remember a time when I was up that early.” A poll among students at Jamesville-DeWitt High School shows that over 70% of students believe that the actual start time of classes was after 10:00 AM.

Despite the disagreement from students, primary sources indicate that first period did indeed begin at 7:45. An analysis of authentic schedules, both online and on paper, shows that there hasn’t been any tampering with the documents.

The only logical conclusion is that the COVID-19 outbreak created a new dimension as a part of the Mandela Effect. The Mandela Effect is when many people remember something differently than it supposedly happened according to “proof” and “reality.” The most likely cause of this is that when major world events occur, a new dimension begins in a separate timeline. With the massive ramifications that this has, sometimes memories from alternate dimensions slip through the cracks.

The COVID-19 outbreak is clearly a large event, and it is almost certainly what caused the Mandela Effect to occur. Now, students are remembering school from one dimension, but exist in a different one.

Now, we have to wait to see what other inconsistencies begin to show up. The widespread ramifications of switching dimensions will impact the world, but more importantly the J-D community, for years to come.

Guiseppe Baxter - January 10, 2020 0
Yampage journalists managed to interview one of the school’s most notorious jewelers, Rainer Yaeger, as he finished jeweling the cuffs of his jeans. “They come in a bunch of different colors, but the most popular ones are cappucino, grape, and tobacco. Even those aren’t as popular as the two that got banned, though.”