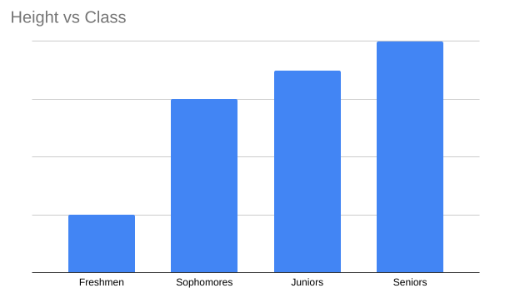 JAMESVILLE-DEWITT HIGH SCHOOL–As we settle into this new school year, many upperclassmen are wondering, “Did the freshmen get smaller this year?”

Senior Alethea Shirilan-Howlett was walking into school on the first day of school when she felt a pull on her leg. She looked down and, much to her surprise, saw a short freshman girl. The girl had been following her older sister, but got confused when she got lost among the sea of legs and ended up following Shirilan-Howlett instead. “I was shocked at how tiny this girl was. I mean, she looked like a fifth grader. I guess I should have seen it coming, each year they get a little bit smaller,” said Shirilan-Howlett, who stands at 7’3’’. The freshman in question, Anka Chiorini, replied, “Uh, I feel like I’m a normal height, maybe you’re just freakishly tall.”

But this isn’t an isolated incident. A survey of the Jamesville-Dewitt population found that, on average, the freshman class was shorter than every other class by a statistically significant margin. The survey also showed that this isn’t just an issue of short freshmen, but every grade is shorter than the one above. “I’m not surprised,” says senior William Guisbond, who is 8’2’’. “Each year, they get shorter and shorter. I’m starting to worry about the future.”

Biology teacher Keith Comfort finds a scientific reason for the shrinking freshman class. “As we saw in the Netflix film Tall Girl, it can be really difficult to be tall. People call you names, ‘Sasquatch’, ‘Beanstalk’, it’s enough that evolution has kicked in. These freshmen are short because they find it easier to get through high school that way.” Senior Ayeh Hajjari agrees. “Being short has been great in high school. I get to run through the hallways like a small dog, weaving between people and just shoving them out of the way. I’m never late for class. I’m proud to be short.”