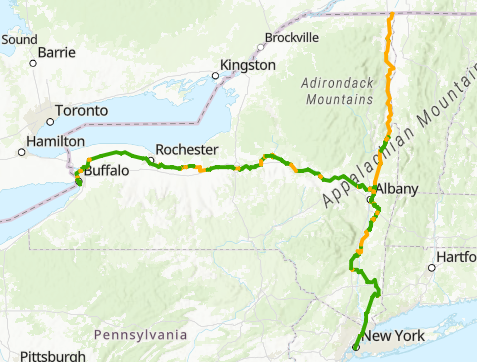 In 2017, Governor Andrew Cuomo approved the funding for the construction of the Empire Bike Trail. While this project was good at heart, it was executed very poorly with disregard for safety and cost.

The Empire Trail was completed in 2020 and linked Buffalo to New York City to the Canadian Border, for a grand total of 750 miles. This was part of an initiative to get New Yorkers out of their houses and experience what the state had to offer and provide communities with paths to walk on. While this may seem good on the surface, it was extremely costly and doesn’t quite make sense in many aspects.

As some of you may know, there was recently a bike lane created in the median of where Erie Boulevard East and Thompson Road intersect. This is problematic for a multitude of reasons. For example, it required a traffic lane to be removed to make applicable space for bikers. This has slowed down traffic in this area and, therefore, increased the amount of traffic piling up during rush hours. In addition to this, the three-mile section on Erie Boulevard cost 23 million dollars alone, and in total, the 750-mile trail cost taxpayers ~158 million dollars. Similar situations to this are found all throughout this trail, all sharing the same issues.

The safety of bikers is another factor that must be considered when analyzing this specific area of the Empire Trail. Erie Boulevard is a busy road, that is undeniable. Thompson Road is also a very busy road. When these two meet, it is not a good idea to add another aspect of traffic for drivers to have to look out for. The bike lane crosses into the road to get to the next median and must go in front of several rows of traffic. All it takes is one person not fully paying attention or a biker moving a little too early, and someone is going to be hit.

In addition to factors individuals can control, the weather is also an issue. Winter is a very long season in Syracuse, generally experiencing snow from November to March/April. Streets are plowed and sidewalks are salted in front of businesses to rid walkways of snow and ice. Governor Cuomo has mentioned that this trail is going to be open all year, even in winter. He did not say how he intends to clear snow or ice off the path. Will it be up to the communities and counties to clear it? If so, that is an additional cost these places need to consider. If not, how will it stay clear over all 750 miles? It will be interesting to see how he chooses to combat this imminent factor.

Overall, the Empire Trail was a good idea but poorly executed. Bike lanes through major roads with no clear plan to clear them during the winter is just not going to work, especially in a place climatically similar to Syracuse. We must put safety above all else, and it seems as though the trail disregards this statement.

The Future Is Zero Waste

The United States Cannot Lockdown For A Second Time