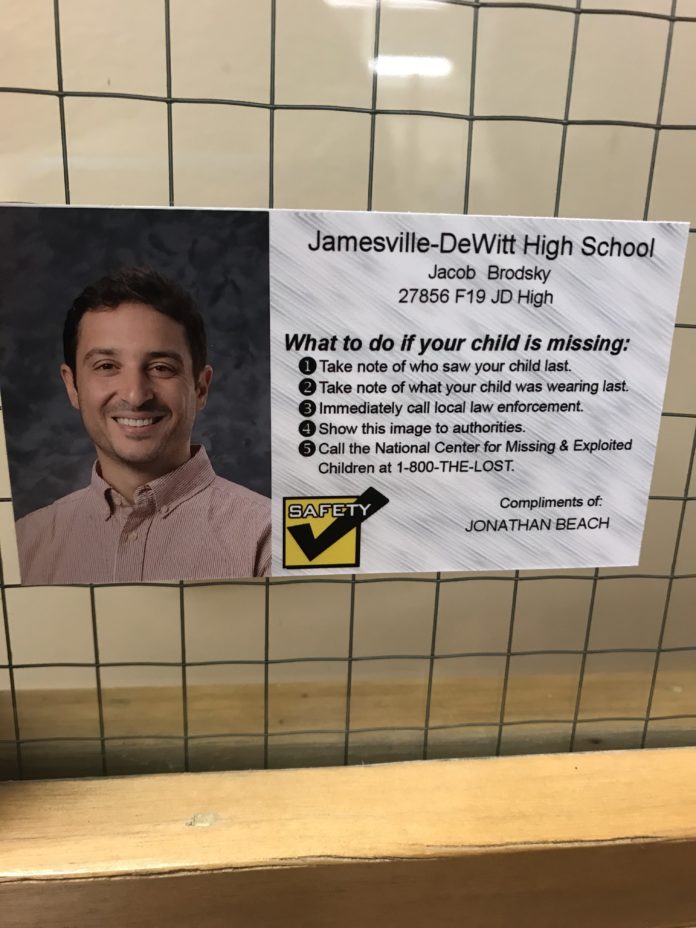 “Look, you can’t blame me for reading that article. It was purely factual. It was just artistic interpretation that took me elsewhere.”

This is a quote from Ms. Ashlee Childers about the article she read before beginning the school’s biggest conspiracy theory. It was an article about the 20 most wealthy people in the world, with names like Jeff Bezos, Bill Gates, and that girl with the really whiny singing voice who won America’s Got Talent by playing four chords on the ukulele.

“I was reading it to get mad. When I see people who have too much money, I get mad. When I get mad, I make art. But this time, I made a connection.” When she was reading up on number 14, Childers noticed something odd about her colleague, Mr. Brodsky. “I thought, wow. Mr. Brodsky kind of looks like Sergey Brin.” Being an art teacher, Childers did recognize that upon further speculation of the picture of Brin, the shapes were off and the eyes were too far apart to be Brodsky, among many other things, but unfortunately, all art teachers are born open to interpretation in one’s art.

Childers told a math teacher, but given that all math teachers are born taking unnecessary words out of word problems, Childers’s sentence became: “Mr. Brodsky really looks like he is Sergey Brin.”

The rumor was quick to spread around the blue hall without Brodsky’s knowledge, and people really believed it.

“I’ve seen him use Google a lot when he’s looking up art references,” commented sophomore Layla Harvey. “That’s pretty suspicious if you ask me.”

“I’ve seen him drive a yacht to school,” said Mr. Ormond. Yampage has clarified with the New York State DMV that this claim is unfounded.

However, when Mrs. Oppedisano, history and government teacher, was informed that her colleague may be the 14th richest person in the world, she was quick to want to put an end to the nonsense.

“Fake news is such a huge problem in our society. People just believe anything they hear,” she said. We followed Oppedisano as she asked Brodsky/Brin? in person: “Mr. Brodsky, are you really Sergey Brin, computer scientist and entrepreneur, co-founder of Google, president of Alphabet, worth 50.1 billion US dollars?”

Brodsky audibly laughed at the statement, and then said, strangely word for word, sarcastically but also wistfully, “Yeah, I’m Sergey Brin, computer scientist and entrepreneur, co-founder of Google, president of Alphabet, worth 50.1 billion US dollars.”

Quickly enough, students and teachers began to riot over this conspiracy. Students Against Kidnapping club, formed by three juniors a week after the conspiracy began in a desperate attempt to put something else on their activity sheet, spread the rumor that the real Mr. Brodsky had been kidnapped by Sergey Brin and the two traded places in some sort of Parent Trap scenario. A group of eager freshman boys with a strange obsession with war history were thrilled to finally have an excuse, (though Brin has been living in America since he was 6 years old), to petition to begin the Cold War again.

However, there were counter-protesters, so lovingly called “non-believers” by Oppedisano, led by librarian Ms. Panek. “I finally found an example of the dangers of fake news in living color for my freshman seminar,” she said. Unfortunately, the non-believers began believing as soon as NHS volunteer hours were offered to those who stayed after school to aid SAK in selling pasta to Russia as a substitute for ransom money.

“It’s been horrible,” Brodsky said in an interview. “A kid ran in here yesterday and stole my computer, and then told me to build a new one. I went to see Mr. Gasparini about the issue, and he said ‘So why don’t you?’ I don’t get it- he looks more like Jeff Bezos than I look like Sergey Brin.”

“We are not JD.” commented Mr Gasparini, who claims he doesn’t actually believe that Brodsky is Brin in disguise. “Sharing is the most important positivity project trait,” (Yampage would like to make it apparent that sharing is not a positivity project trait at all) “and if whoever works in that art room has a yacht and isn’t going to share it with me but has the audacity to drive it to school, on our own school parking lot, they may just as well be a billionaire kidnapper who I don’t know.”