RamPage
Home Culture The D’Amelio Family Gives Fans a Behind the Scenes Look Into their... 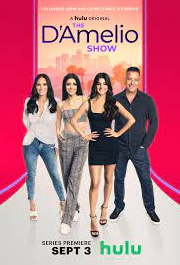 In the all new original show on Hulu “The D’Amelio Show” fans get a closer look at what the overnight rise to fame was like for the D’Amelio family. The show follows 17 year old Charli D’Amelio who is currently the most followed person on the app, TikTok, with over 123 million followers, and her family as they try to navigate life in the public eye. The show also features Charli’s older sister, Dixie, who has a huge following as well and is working on her music career, as well as parents Heidi and Marc D’Amelio who give interesting insight as to what it is like being the parents of two of the most followed people on the internet.

Charli first blew up on TikTok in the summer of 2019 while posting dance videos from her home town in Connecticut as a high school student. She rapidly started to grow and gain a massive following. TikTok went crazy once she introduced her sister, Dixie, and both sisters began being the most trending duo on the app. In episode three of the series, Charli says “I don’t consider myself famous, I’m just a person that a lot of people follow for some reason. I think it was right place, right time.” However, many people would disagree and say that Charli is definitely famous and is now one of the most recognizable faces of gen-z. Dixie also talks about her unexpected life path from initially planning to go to college at the University of Alabama and now making music, which was her childhood dream come true.

An element to the show that sets it apart from every other reality show on the air is how it deals with vulnerable moments from their lives. Having such a large following is not everything it seems and it goes deeper into how the girls deal with anxiety and hate at such a young age. Both girls are affected by the hate that they get but deal with it in different ways which relates to viewers because it shows how Charli and Dixie are just regular people who also deal with mental health issues. In the show, Charli goes into her history with anxiety and how she gets nervous to even leave her house with fear that someone is going to make fun of her in public or she will have an encounter with paparazzi. Dixie also breaks down after a video she did with Vogue got overwhelming amounts of hate, she felt like she couldn’t even be her authentic self without viewers picking apart her appearance in every way. In another scene, Charli has a panic attack before the Nickelodeon Kids Choice Awards and talks about how she used to have 10-15 daily. Discussing the topics of mental health is important especially with such a big following because it goes to show that even though the girls seem like they have it all, they still struggle with everyday anxieties and pressure to meet the expectations they have for themselves.

Another thing that makes the show interesting is the people in their lives that guide them throughout their journeys of fame. Heidi and Marc D’Amelio are Charli and Dixie’s biggest fans and only want the best for them. However, they explain how it is hard for them to watch their daughters change and begin to care about pleasing their millions of followers. The series also shows the friends that Charli and Dixie have made and talk about how it can be hard for them to make real friends that don’t just want to be with them because of their following. Popular figures on TikTok also make cameos on the show such as Madi Monroe and Avani Gregg, Charli’s best friends, and Noah Beck, Dixie’s boyfriend.

Within posting videos, instagram pictures, going to meetings, and making time for relaxing, Charli and Dixie also show the behind the scenes of being an influencer and show the making behind their brands such as Social Tourist, their collaboration with Hollister, 2 Chix, their podcast, their work with makeup brand Morphe 2, and making music. It becomes obvious to the fans that they put in countless hours of hard work and do more than just make Tik Toks all day. It also shows that they are passionate and dedicated to what they do and are so grateful for all the people that follow them that were able to make it happen.

“The D’Amelio Show” on Hulu was a huge success in showing what life is like behind the scenes for one of the most followed families of our generation.

This JDHS Student’s Photography Will Blow Your Mind