RamPage
Home Lifestyle Food The Curtain Between Us And Our Food 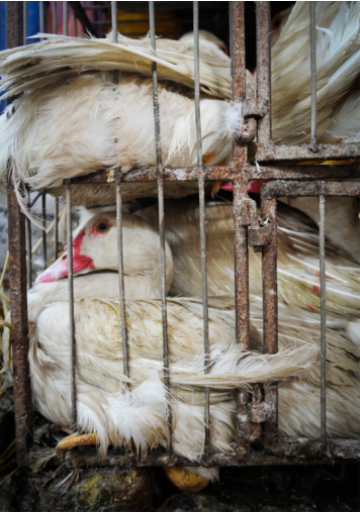 Although 2018 was full of many new discoveries and innovations, it was also a year for the nation of meat eaters. On average, according to the Department of Agriculture, Americans ate 222.2 pounds of meat throughout the year, which is around 10 ounces a day — almost double what nutritionists recommend. With this enormous intake of meat, an often unknown question should be asked: Where is the meat I’m eating coming from, and how is that animal being brought up? This question can be vital to one’s health.

Surpassing 100 billion pounds of meat and poultry output in 2018, meat was on the rise this year even after several celebrities such as Ariana Grande, Zac Efron and Miley Cyrus shared their choices to not consume it. While the choice not to eat meat may come from many reasons, more often than not, a large reason is how animals are raised and how the meat is produced. The gap widens between what we see in our local supermarkets and the gory details behind the meat-producing corporations and farms, now largely invisible to us.

In the meat industry, a cow’s lifetime ranges from 6 to 12 months compared to their predicted 18 to 22 year lifespan. But what happens in these short months? Cows are first placed in feedlots after living for six months on grass plains. There they are fed grains and corn to fatten them up, which wreaks havoc on their digestive systems because they are grass fed at birth, so they are given many different types of antibiotics to help combat. Then, whatever cattle survive the feedlots are sent off in trucks, crammed next to each other, to the slaughter houses. With such quick lifespans these cows aren’t inherently healthy, being overgrown in such a short period of time. In addition, the antibiotics included in the cows food are a farmers secret and usually unknown to the public. Over 80 types of antibiotics are allowed to be given to the cows. During the lengthy process that leads them to the slaughterhouse, many of the cows are too weak, sick or unable to move from their diets and the conditions they have been in. Therefore, when the cow dies, it is often sick and that is the very meat people are eating.

If you thought the cows live a short life, chickens range from 21-170 days. To give you an image of what chickens lives look like, they are placed in huge, dark barns with 10,000 to 20,000 other chickens. They are fed high-protein diets to make the chicken as large as possible in a short amount of time. Similar to the cows, so many chickens in a confined space often results in the development of diseases and sickness. Living in such an unsanitary environment, many chickens are fed antibiotics to try and keep the birds “healthy” for slaughter time. 25-30% of chickens have difficulty with or are unable to walk because they are forced to grow up to 65 times faster than their bodies would normally grow. Barbaric as it is, in the past 60 years, the number of chickens sold have skyrocketed to 1,400%, from 580 million in the 1950s to 9 billion today.

As unpleasant as these practices are, they need to be broadcasted. The curtain between one and their food should be none. We all have the right to know exactly where our food is coming from, regardless whether one eats meat or not. Due to the mass consumption of meat, these ways almost seem necessary to any meat eater, but they only reduce the quality of meat. In addition, people end up consuming the hormones and antibiotics that are injected into animals. Not only a scary thought, but a reality among us all. From feedlots, to cutting animals lives immensely while over developing them, it’s a hidden secret in the food industry that they aren’t proud of. Many companies even deny interviews and questions asking about their farms for this very reason. Think about it a little more the next time you go to the grocery store, do you really want that fueling YOUR body?

Dunkin Donuts Versus Starbucks – Who Has The Better Holiday Menu?

How to Make Superfood Dark Chocolate Bark By: Francesca Chirco