RamPage
Home News Local The 2019 Budget and School Board Vote 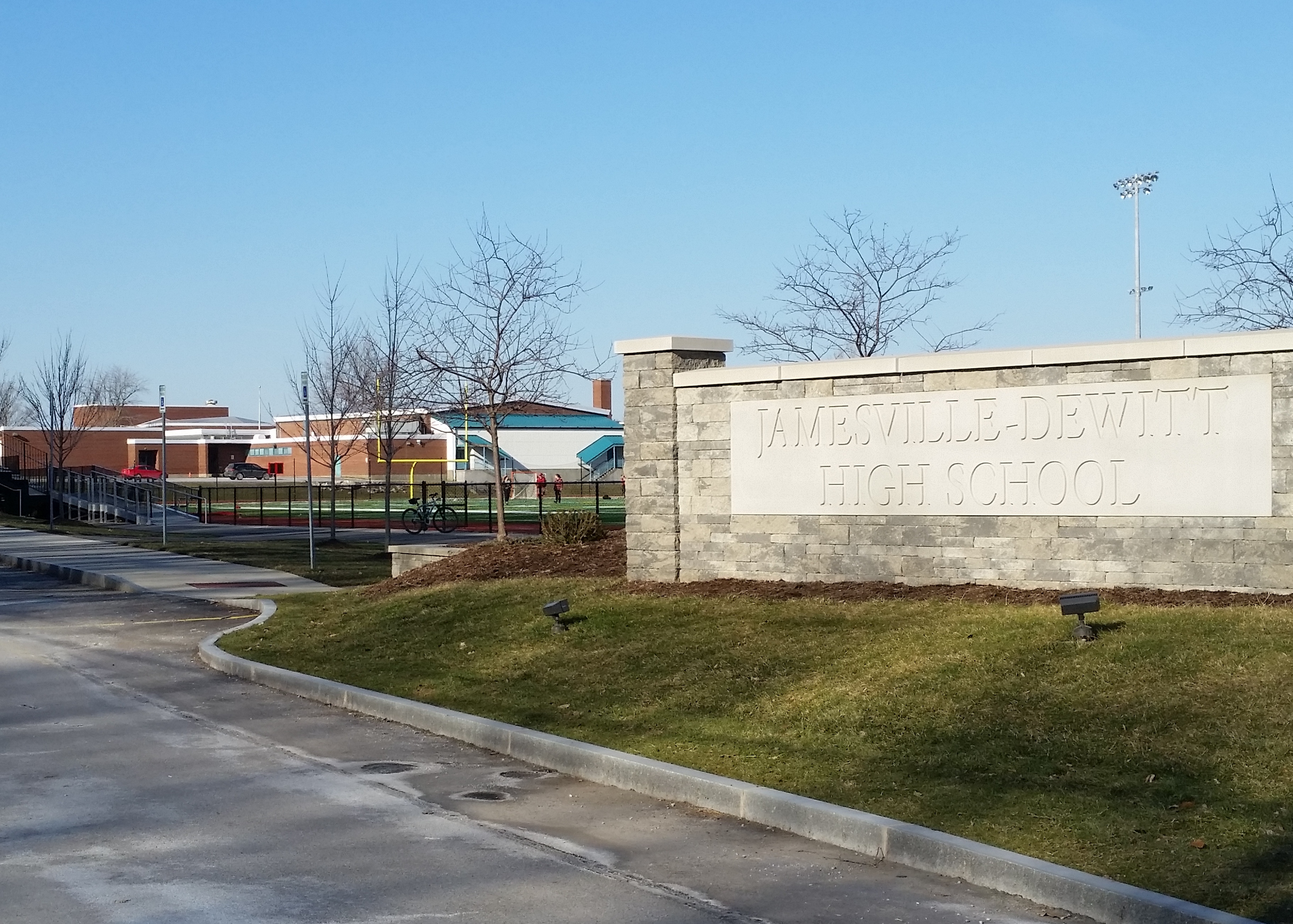 JD Heads to the Polls

Update: May 22nd. The results of the 2019 Jamesville-DeWitt Board Elections are as follows:

On Tuesday, May 21st the Jamesville-DeWitt community will elect five new school board members to 3 three-year terms, 1 two-year term, and 1 one-year term. Nine candidates are running for these five positions, two of them for re-election. The candidates are Sharon Archer, Dana A. Corcoran Ph.D. , Kerry Coleman-Herrick, Lori DeForest, Renee James Murad, Gabriella Kielbasinski, Karin Kirnie, Ken Souser, and Angela Tyson. Both Dana A. Corcoran and Angela Tyson are running for re-election.

From making students’ voices heard to keeping taxes at a steady rate, the candidates have various sets of goals they wish to accomplish if elected. The candidates were asked a series of questions related to their ideas on student press freedom and what they hope, and plan to do, if elected to the Jamesville-DeWitt School Board.

According to Ken Souser, “the role of a school board member is fulfilled by performing five responsibilities: setting directions, establishing an efficient structure, providing support for the superintendent, ensuring accountability, and providing community leadership as advocates for the children of the district.”

Asked about what sets her apart, Gabriella Kielbasinski, 2015 J-DHS graduate, says, “My age obviously is a crucial thing that puts me apart from the other candidates. I think I would bring a much more youthful insight. I think that the student experience now compared to when a lot of the candidates were in school is drastically different. The culture of JD has changed tremendously, so if we’re gonna make effective policy about JD we need an in-depth understanding of that culture.”

While many candidates do not have specific agendas, they all have ideas that they believe can impact the schools and community.

Candidate Lori DeForest said, “If elected, I would work with the JD administration, fellow board members, staff, teachers, students, and the outside community to thoughtfully and collectively develop a responsible budget that meets the needs of our diverse student population, engages and connects students to their school community through a variety of electives and extracurricular activities, and provides professional development for teachers and staff to continue to deliver rigorous and challenging instruction to prepare our students for their desired futures.”

Budgeting towards different regions of the school varies depending on the number of students enrolled in each course or sport. Candidates were asked if these regions should be covered equally, both financially and publicly.

Candidate Dana A. Corcoran said, “It depends on the number of students that are within that field. You know there are certain allocations of dollars affected by how many kids are in programs, and I certainly feel like we would like to know about these groups and if they feel marginalized in that.”

Candidate Angela Tyson stated, “I think they do look at the volume of student participation to kind of balance how the funding weighs in. I know that we have received presentations from [Model United Nations] probably two or three years ago where they requested and did a presentation of why they felt they deserved more funding to help supplement travel expenses . . . And we were able to find some funding in the budget year as well as build it into the future years.”

Candidate Sharon Archer said, “Both of my boys are musicians and I feel like they have grown from the exposure to the arts programs here, and that’s definitely something I feel like deserves the same level of attention and celebration. I think sometimes some of the programming gets outshined by the academic excellence. This concern has touched my children personally and it’s definitely on my radar.”

Some candidates hope to make changes to materials, classrooms, and other areas in the district.

Candidate Renee James Murad said, “We have to look at what’s needed. For example, sensory pads for students who have ADHD as well as different supplies. We have to look at in terms of what needs our focus the most.”

Candidate Kerry Coleman-Herrick said, “K-8,  I have a great feel for what we need there. From ELA curriculum to new computers in the middle school. And all those need to be addressed.”

Candidate opinions vary on the issues facing the J-D district, or if there are any at all.

Candidate Karen Kirnie said, “There are many pressing issues within the school district, the most obvious one being budget. Our numbers and budget are going down every year. We expect that to happen because people have a rate of living and other expenses that need to be paid.”

Candidate Lori DeForest said,  “I believe there are a few pressing issues for the Jamesville-DeWitt district and believe we are moving in a positive direction with many.  We need to continue to work on building a collaborative and caring community where multiple perspectives are heard.”

Candidate Ken Souser said, “There is no pressing issue that I am aware of, other than, one of the pieces that keeps coming back, the taxation, school taxes.”

While candidate opinions vary on the amount of issues in the district, all plan to work to resolve these issues that members of the community feel are important.

A referendum to add a student position to the school board has come to the attention of many district residents.

Kielbasinski said, “I think it’s long overdue. I think the idea that we even need to vote to have one, and the fact that it’s not already the status quo says something in of itself.”

James added, “I think it’s great.  We’re on the school board for our students, and they should definitely have a voice that is there on a regular basis.”

Of the student positions, Kirnie said, “To have a community is having people together, which is very important. I think it’s a way to make sure things are heard.”

Having student’s voices heard remains a problem in the majority of educational institutions. While students may wish for some type of change, many do not know where to go to voice their opinions, ideas, and concerns. All nine candidates wish to make themselves more accessible for student opinion in order to guarantee all student voices are heard.

Kielbasinski, who has been working with middle schoolers for six years, believes that students may not always notice adults and administrators reaching out, and that these people must find a way to reach all students. She says “So we need to be engineering an environment where that student feels heard. So that would be my biggest thing.”

“One of the other things I have put out in public comment is that we should have a board liaison to the school. So a board liaison to the school in my school district means that you go to after school events, you tour the building, you are on call when something happens in the building and they want to make sure it is brought to the board’s attention. You’re the person that they go to. And that’s something I’d like to see JD implement as a policy so that there is a voice for students, teachers, and community members. We need to be engineering an environment where that student feels heard.” says Coleman-Herrick.

Delving into school newspapers and student press freedom, candidates were asked if they believe administrators should have final say over material published on the school newspaper, rather than students making the executive decisions.

Corcoran said, “I do think that the administration has to have some oversight, not censoring.  I’m talking about monitoring and that’s two very different things. There needs to be some conversation around is this [article] appropriate for you to put in the paper, is this going to put you in jeopardy?  I think there has to be some oversight and monitoring over stuff that goes out to protect [students] and the district.”

Tyson said, “From your perspective as a student, if a certain topic is not permitted to be released, I think I don’t have an opinion. There should be a compromise if the topic’s not appropriate . . . a variation of the topic would be acceptable as long as it has two sides and it’s not a one-sided article.”

The opinions of students, parents, and school officials all carry weight when making decisions revolving around the school. When asked who should carry the most weight in establishing school policies,  candidates had various answers.

Archer said, “I feel that what’s most important is balancing and listening to each stakeholder and collectively making decisions. No matter who’s going to agree, we’re not always going to come to a consensus that every voice is equally valuable.”

DeForest said, “I believe in collective wisdom and that all perspectives are important to make the best informed decision.  One of my favorite quotes is ‘I’ve learned that two people can look at the exact same thing and see something totally different’ by Omer B. Washington.”

Washington’s words indeed capture the nine candidates running for the board of education this year. While they may address certain topics differently, their main goals are to improve the infrastructure, balance the budget, and make sure students have a voice that can be easily heard. These candidates are running in hopes of maintaining and improving on the standards and reputation this district strives to uphold.

The Jamesville-DeWitt Central School District will hold the 2019 Board and Budget Elections in the High School’s Main Gymnasium foyer between 7 a.m. – 9 p.m. on Tuesday, May 21st. Complete transcripts of all candidate interviews are available in the news section of the RamPage. Candidate biographies and details of the budget proposal are available in the special edition of the JD Journal mailed to all district homes in April and reprinted online at the district website.

For many J-DHS seniors, this will be their first opportunity to exercise their voting rights in a government election.

The 2020 Budget and School Board Vote