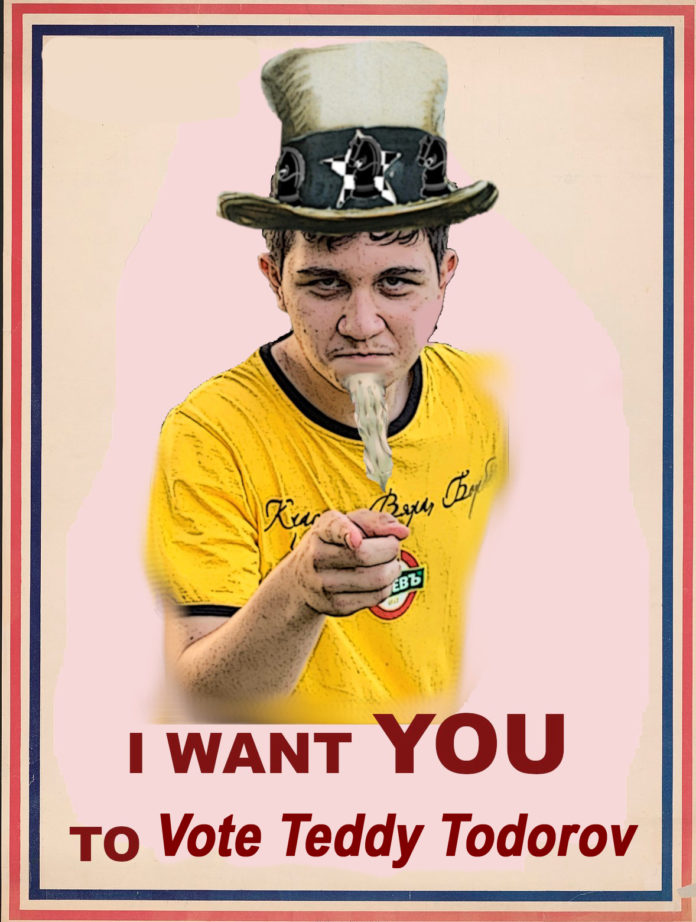 This year, slate elections for all grades were held via Google Forms sent to students’ emails. Unlike the sophomore class who had a healthy amount of slates for students to vote for, the senior class had one. However, the option to write in someone other than the established slate remained open.

“That was their fatal mistake,” senior Teddy Todorov said. In a shocking turn of events, Todorov gained enough write-in votes to win the majority among students. Either Ms. Oppedisano and Mr. Cotett didn’t do a good enough job in Government classes to explain the importance of voting, or Todorov found a way to hack the Google Form. Either way, Todorov went from your average high school student to President, Vice President, Secretary, Treasurer, and Director of Communications of the senior class.

“I think we can all agree that saying all my titles would take too long,” Todorov said in our interview, “so I think I will take the title, ‘Supreme Leader.’ It was that or ‘God-Emperor.’ ‘Supreme Leader’ has a better ring to it, don’t you think?”

You, like everyone else, may be wondering what policies Supreme Leader Todorov hopes to put into place during his reign. We were able to get the scoop on three of his most important changes he likes to call, “The Three Essentialities of a Virtuous School and Life.”

First, the Chess Club, which meets in the cafeteria every Thursday during activity period, will receive all funding initially dedicated to the football team. Second, there will be no more voting for slates, Todorov will fill all future positions. Third, homecoming will be changed from a sports game to a MUN conference. Todorov believes this will be more constructive and just as exciting for students.

When asked about his hopes for the future, Todorov said, “I hope to gain, consolidate, and maintain my power. Eventually, I hope to exert my sphere of influence onto the school slate, not just the senior slate.” If there is anything the district can be sure of, it’s that Todorov paid attention in Ms. Rice’s AP World History class.

This story is developing as Todorov implements his plans and further details emerge.

Chemistry and Biology Teach Students the Life Lessons of Loss and...