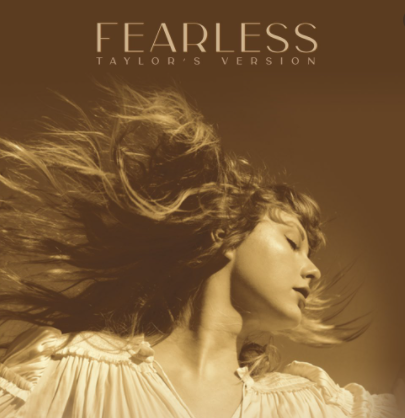 Swifties all around the world have been awaiting the release of Taylor Swift’s new album “Fearless (Taylor’s Version).” But what’s so different about this particular album is that it’s been done before. The album showcases re-recordings of all 13 songs from Swift’s original second album “Fearless,” released in 2008, along with six “vault” songs that had been written at the time and never released. The re-recorded album will have double the amount of songs on the original album, totaling 26 songs.

The purpose of re-recording and releasing the songs is for Swift to own her music’s rights after a huge music custody battle with ex-manager Scooter Braun. Braun sold the master rights to Swift’s first six albums to make sure she couldn’t get her hands on them. This is most likely because the master rights sold from anywhere between 300 to 350 million dollars.

In anticipation of the re-release, Swift got fans excited by releasing two vault songs and one song from the original album before the release of the whole album. When she first announced she would be releasing this, she dropped the re-recorded lead single from the original album “Love Story” to give fans a glimpse into what their favorite originals may sound like now. Next, came the release of the vault song, “You All Over Me,” featuring pop singer Marren Morris. This left her whole fandom questioning what other gems may be in the vault that were never released and why they weren’t on the original album.

If this wasn’t enough to get fans excited, a week before the album’s release date, Swift released a video on Twitter with all of her vault songs’ titles that would be included in the new album. The only catch was all the letters of the titles were rearranged. Still, this didn’t stop fans from figuring out the other five new song titles. In order of how they are on the album, the titles are, “Mr. Perfectly Fine,” “We Were Happy,” “That’s When,” “Don’t You,” and “Bye Bye Baby.”

Just a day before the album was supposed to be released (April 9, 2021) another vault song was unexpectedly released. The 15th song on the track, “Mr. Perfectly Fine,” rumored to be about ex-boyfriend Joe Jonas, struck fans by surprise mid-day Wednesday, April 7. Jonas’ wife, Sophie Turner, eradicated all rumors of bad blood with Swift by posting her love for the song on her Instagram story. She quoted sarcastically, “It’s not NOT a bop.” Swift responded by reposting Turner’s story and saying, “forever bending the knee for the (queen) of the North,” referring to Turner’s acting role on the popular show, “Game of Thrones.”

Comparing the six vault songs to the original 13 songs on “Fearless,” there’s a noticeable difference in one particular one, “You All Over Me.” When listening to the album as a whole, it’s the one that really stands out in terms of instrumentation and lyrics. The whole original “Fearless” album has more of a country feel to it based on the background music – use of guitar and the accent of Swift’s voice in the year 2008. With the re-recording, some of that country additive was lost with a matured voice and many fans state all of the tracks lacked the original emotion found in the earlier album. And while the song definitely didn’t lack emotion in terms of lyrics, it seemed like a song that would’ve been written and placed onto one of Swift’s new albums. Nonetheless, this didn’t keep anyone from enjoying the song any less as it’s the second lead track of the release so far.

As of right now, Swift hasn’t made any announcements on what her next release will be or when that may be. But some fans speculate her next re-recorded release will be her 2014 album, “1989.” During her interview with Stephen Colbert on “The Late Show With Stephen Colbert,” she dropped many hints referencing many songs in the album. Rumor also has it that pop singer Harry Styles will be featured on this album, maybe even making a musical appearance in her song “Style.” Although nothing has been announced yet, Swift has been known to drop what she calls “Easter eggs” that are hidden references to what she’ll be working on next.