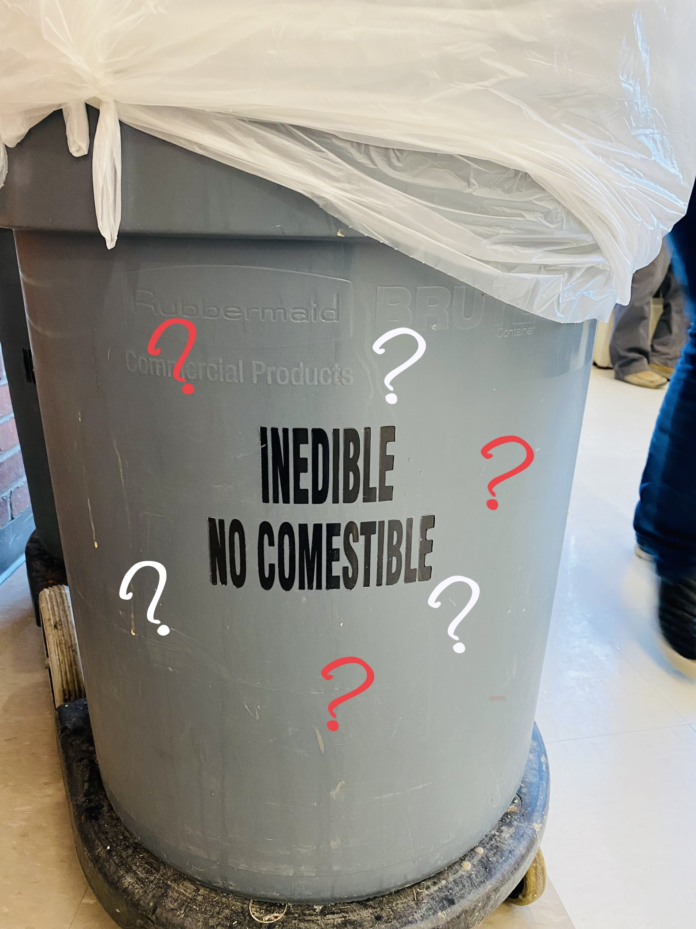 Attention readers: one of Jamesville-DeWitt High School’s longest-standing mysteries has finally been explained! No, it isn’t the phenomenon of why J-DHS students arbitrarily begin walking backwards around the halls, but it might be the next best thing! Finally, a resolution to the perplexing puzzlement of J-DHS’s very own… trash cans.

That’s right, an answer at last to why the high school’s large, industrial trash bins are each branded with the words, “INEDIBLE NO COMESTIBLE,” though we here at YamPage are at least 67 percent sure those words are not a single sentence. For the purposes of this article, we will refer to just the first word, “INEDIBLE.”

Years have gone by since those bins were originally and mysteriously marked with those words. But after all this time, new information and evidence have finally surfaced, and YamPage has unearthed what seems to be the solution to the question: why do the trash cans say “INEDIBLE”? Could it be a reminder that the contents of the bins are inedible? Perhaps to remind people to put their inedible items in the trash? Plausible theories all, but alas, they are incorrect. In fact, the word is much more literal: a command to deter any who might try to eat the trash bins. As it turns out, it is a much more common issue than one would think.

Security camera footage and multiple documents have been leaked to the public—so long as you consider the Jamesville-DeWitt School District the public—that all show one thing: people like to eat trash cans. There have been at least 28 distinct instances of students attempting to consume J-D’s trash bins, and at least three instances of staff attempting to do the same. While the names of almost everyone involved are non-disclosable, four students’ names are: Paige Yamera, Yamilla Pager, Lin-Yamuel MirYamda, and Bill, who has no last name. The actions of these students and teachers eventually drove J-D to brand each and every one of their garbage bins with the infamous words, “INEDIBLE NO COMESTIBLE.” These words went along with what was thought to be an unspoken rule: no one should eat the trash bins.

However, that wasn’t the end of it; although rare, there have been more instances of trash bin consumption. Nine students and one teacher have been reported to have eaten and recorded eating the beloved garbage bins of J-DHS. One shock to the entire school was the favorite English teacher of many, one Mr. Joe DeChick, being caught on camera trying to eat one of these trash cans. Security camera footage has been released that shows Mr. DeChick trying to taste the trash bins in the small cafeteria at J-DHS.

Mr. DeChick has gone on record in an official interview with YamPage to state his reasoning. He claimed that, “The course of trash love never did run smooth.”

While no one understood what he really meant, it is thought that he ate the trash bin for the same reason the two other interviewees did: it just tasted good. To quote Sam Yam, “It just tasted so good, man… It was irresistible! I don’t know how you people don’t lick trash bins! Wait, what am I even saying? Hang on, can you cross this part of the interview out? Did you do it? Um… okay then, I’m gonna hope you crossed that part out. Wait, why are you still writing?! Hey sto—” It is too bad that Sam never finished his sentence, but he made his motive clear.

Another trash can consumer is Lin-Yamuel MirYamda. He said, “¡A mi me encantan los envases de basura!” which our expert translators have said probably means he loves trash cans, but they have also told us that there is a five percent chance that it means, “I’m trash that I can love!” So a bit of advice, readers: take that one with a grain of salt.

As things stand right now, it is entirely unclear whether or not Jamesville-DeWitt High School will make any more moves to stop the consumption of their garbage cans. Some students and faculty have reportedly been placing bets on it, but one thing is for certain: J-D’s trash bins have a reason to be marked “INEDIBLE.”

Françoise von Farquaad - February 7, 2020 0
“I haven’t blinked in days,” stated sophomore David Scibilia who didn’t even bother to look up from his Tamagotchi the entire time he was being interviewed. We found David hiding under the staircase by the trainer’s office. Only days after we interviewed him, David lost his Tamagotchi when he blinked for the first time in almost a week. Scibilia later sent out invitations for his Tama’s funeral.