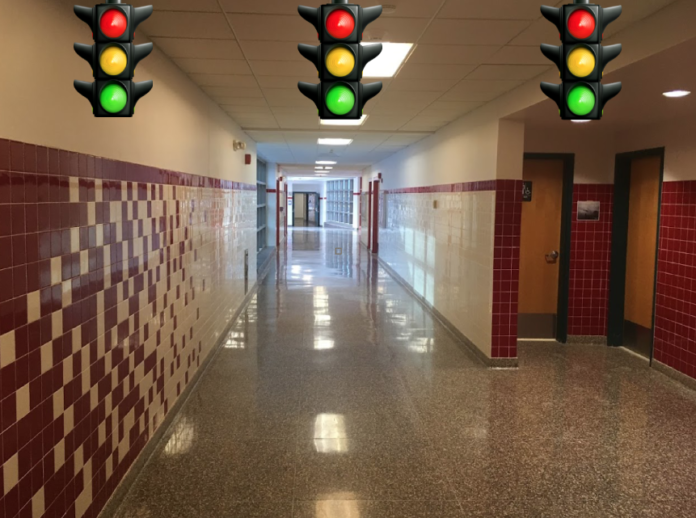 Dewitt, NY— At the end of second period on Monday, the crowd of students at the red hall intersection led to the whole area became entirely impassible. The students continually attempted to push through the crowd, but the throng of people just wouldn’t budge. “It was horrible, I felt like I was being crushed, but I couldn’t just turn around or I would have been late for my ceramics test!” exclaimed junior Amelia Hesler. Hesler’s efforts were in vain, however, as she was still extremely late. The human traffic jam didn’t clear up until 12:51 pm that afternoon. “It just went to a whole new level of extreme,” said junior Angie Smith, “I thought I would never get out of there. On the bright side, I became friends with the person next to me.”

In response, students demanded change in a way never seen before in JD history. On Tuesday, in a remarkably coordinated move, they staged a plank-in in the district offices, main office, counseling center, and department offices. Hundreds of students participated in this protest for administrative action regarding the hallway by lying immobile on the desks and floors of every administrator workplace. Though united in their protest, there are varying opinions amongst students as to the best plan of action. “Why don’t we just add lanes, stop signs, and traffic lights to the school hallways?” asked senior Evan Blust. “The plan is clear, we should just bulldoze the entire science department so there are fewer students in the intersection,” announced junior Maggie Frank while recording the protest for Instagram live. “We don’t even need science anyway, no one uses it.”

In a shocking turn of events, Jamesville-Dewitt School Board President Susan Petrosillo announced the installation of a new system of traffic lights at the intersection of red hall and the library hall. “We believe that this traffic light will be a great step in our uncompromising commitment to excellence. It will not only teach our students the rules of the road, but also be useful for our art classes to photograph and draw, our computer science students to program, and our english classes to write poetry about. In addition, we will be cutting passing time to just 2 minutes as it will now be much faster to get between classes. We are JD!”

The student response to this new development is not yet clear, but rest assured, Yampage will cover every moment.

Françoise von Farquaad - April 27, 2020 0
“I want to make sure that even when students are at home they are ready and prepared to evacuate at any given moment,” stated Gasparini.