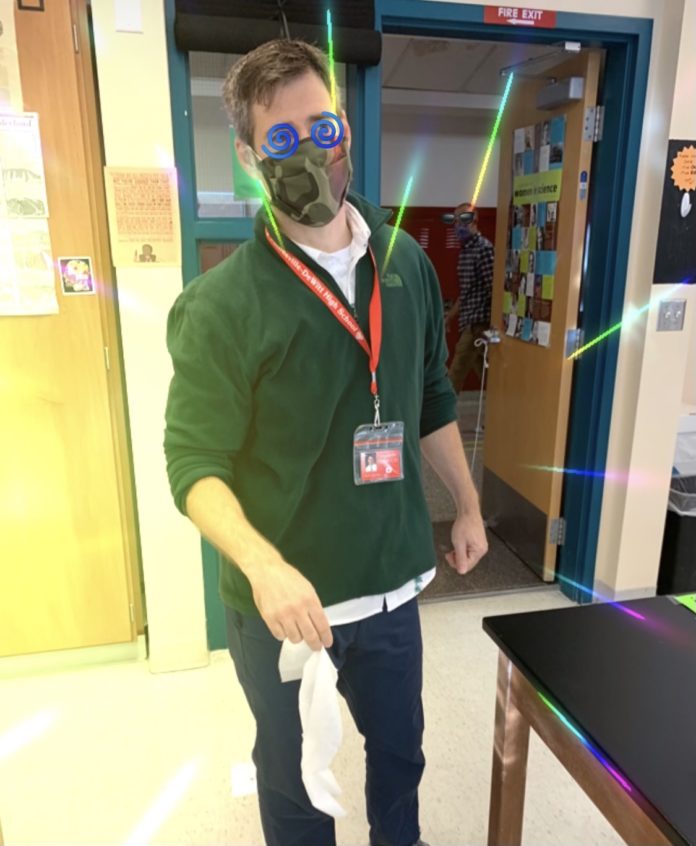 This Thursday, a rare sight was seen at JD, progressing down the red hallway: a giant, rollicking conga line of partially inebriated students.

Supposedly, the source of the dance frenzy was a school-sanctioned bucket of wipes in Mr. Sommer’s classroom. According to the latest reports, too much of whatever ridiculously potent chemical the school is using in their wipes was put into the bucket– just enough to get 14 unsuspecting Earth Science students high.

The students began to feel the effects just moments after they wiped down their desks.

“At first, I just thought there was something funky in that peanut butter and pickle sandwich I had for lunch, but then I realized something weirder was going on,” freshman Grace Culligan told Yampage.

Some students reported experiencing lightheadedness and uncontrollable giggling, while others swear they remember Mr. Sommer performing a waterless synchronized-swimming routine. (Despite our best efforts, Yampage has been unable to confirm nor deny the occurrence of this event).

Before long, the effects of the wipes led the entire class to form a conga line, which quickly made its way out the door and into the hallway. From there, it traveled up and down the red hall twice — the line leader apparently had difficulty finding a “down” staircase — before descending the stairwell adjacent to the main gym and invading the blue hall.

It lasted for nearly 27 minutes before authorities were able to put a stop to the conga madness. This was, in part, because there was no existing procedure for terminating a conga line, and also because several of the authorities sent in to retrieve the wipes became inebriated themselves. Both Officer P. and Mr. Nylen were reported to have joined the conga line after a failed attempt to remove the bucket from the classroom.

In fact, by the time the conga line was dissolved, it had accumulated 56 participants. At least thirteen of these participants said they did not experience the effects of the chemicals, but that the conga line “just looked like fun.”

The conga’s momentum was only halted when Mr. Gasparini brought in his megaphone. His initial efforts to politely request the students to return to class failed, so he finally resorted to hypnotizing the participants. This strategy proved highly effective in getting the kids back to class; however, a handful of students now perform the Cha Cha Slide to completion any time the words “We are JD” are spoken.

Since word got out about the wipe-induced conga escapade, many concerns have been raised about the whole affair, but Gasparini has reassured the public that they have no reason to fret. “Not to worry: the participants of the conga line were spaced six feet apart at all times.”