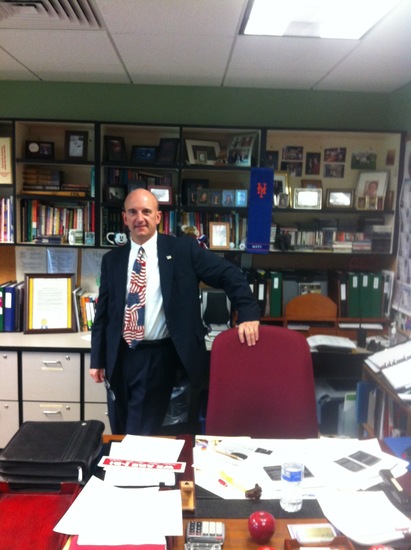 Every year, Jamesville-DeWitt High School strives to stand out from the crowd. Over the summer, Newsweek Magazine ranked J-DHS the 561st best high school in the nation, which places our school as no. 1 in all of Onondaga County. Despite our school making us proud and achieving national acclaim, Principal Paul Gasparini and his devoted staff know that there is always room for improvement. We sat down with Mr. Gasparini to talk about his plans and the State of the School for the 2013-14 year.

As with each year, the 2013-14 school year has brought with it a litany of new students. This year’s freshman class is noticeably larger than classes in years previous. As a result, some classes are larger than they typically are. If future freshman classes continue this trend of growth, J-DHS will be in dire need of change. Fortunately, Mr. Gasparini has already taken this under consideration; “We’ve already talked about what we need to do: maybe add some more teaching staff because the school’s going to get a little bigger over the next couple years,” he said; “Class size is in some cases an issue, and it’s something we have to manage through the year and look to then abate in years coming.”

This year’s freshman class also experienced a whole new “freshman open house” in August. The open house, which was organized by the J-DHS student government, was a big success according to Mr. Gasparini. “The freshman open house in August was very helpful,” he affirmed; “The students who are new to the school, our freshmen and other new students, seem to be adjusting well.”

Other changes to the school this year include the updating of the building’s wireless infrastructure. “The report I have from teachers right now is that our network is running very smoothly,” Mr. Gasparini said. By updating the WiFi within the school, J-DHS has poised itself to make the jump into 21st century learning, which could include the use of tablets and cellphones in the classroom. “The question becomes, ‘do we let students bring their own devices?’” Mr. Gasparini asked;“If they bring their own devices, can they connect as guests to the network? What does that look like? We have a number of policy questions to ask.” Mr. Gasparini added that the school is also looking to update the PC Lab and laptop carts.

There are several new classes that have Mr. Gasparini excited. Among them are Chinese 4 and the new SUNY ESF Environmental Science elective course. The SUNY ESF course is a college credit-bearing course that involves field trips, lectures and more. Mr. Gasparini is also thrilled about the expansion of the Weight Lifting Club, now known as the Fitness Club, and the new cooking club. “I like to eat, and I’ve already told [cooking club members] I expect a special little kickback there,” Mr. Gasparini joked.

One goal of the administration this year is to make the new ‘We are J-D’ initiative a permanent fixture at J-DHS. The wheels have already been set in motion for a sign adorned with this motto to be placed outside the main entrance of the school. “[Assistant Principal Will] Dowdell and I have been here for 13 years, and we’ve had a lot of philosophical conversations about the school and what the school should be, what we should look like, what we should talk about,” Mr. Gasparini explained; “The belief is not new that we have a unique school community that is inclusive. The idea behind ‘We are J-D’ is that everybody who walks through the door as a student or staff member needs to feel as though they’re a part of the community and they’re responsible and respected as a part of the community.”

Along those same lines, the Dignity for All Students Act is back again this year. This is the second year that the statewide anti-bullying legislation has been in action. “We treat everyone with dignity and respect regardless of individual differences, differences in belief [and] differences in background,” Mr. Gasparini said; “We all have differences, but if we respect one another’s differences and have a respectful, polite environment, I think we’ll have a positive year.”

As you might have noticed, J-DHS does not yet have the turf field that was expected to be put in place by mid-September of this year. Mr. Gasparini’s understanding is that the J-D Turf Committee was unable to raise the funds to put in the turf field by their initial deadline, which was in April of 2013. The Turf Committee approached the Board of Education for an extension, which they were granted. “I know that the Turf Committee is a very good group of people, very committed to Jamesville-DeWitt, very committed to our students having the best, highest quality resources we can have,” Mr. Gasparini said; “They’re working hard to try to achieve that goal.”

Although J-DHS seeks to add a lot of exciting new things to our school community this year, Mr. Gasparini maintains that the school exists for one noble purpose: educating the leaders of tomorrow. “One of the things I go over with the faculty in the first faculty meeting is fundamentals [and] never forgetting what we’re really here for, and that’s teaching and learning,” Mr. Gasparini said; “Teaching and learning is millennia old. Socrates was a great teacher three millennia ago. We can’t lose sight of that. There are essentially fundamentals, and anything we can do to work and encourage those fundamentals we just have to keep our eye on. We’re always working to make our school better.”

College Football Nearing its Fourth Down

NBA Playoffs Come Down to the Wire