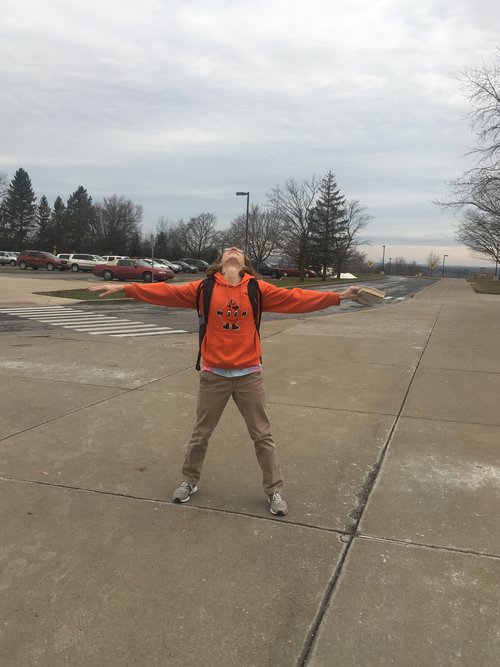 These days you might find yourself wondering why there are there so many kids t-posing on the turf during lunch. Look a little closer and you’ll see that they’re in fact doing much more. They are in the process of testing mankind’s capability of photosynthesis.

One of JD’s most well known courses, honors biology, is infamously challenging for sophomores. “I would’ve done anything for extra credit in that class,” says former honors biology student, Emily Bobrek. Teachers Mrs. Raicht and Mr. Comfort understand the material can be challenging and sympathized with their students.

“We wanted to come up with an easy, yet fun and educational way for our students to get extra credit,” says Mr. Comfort. “That’s when Mrs. Raicht and I came up with a brilliant idea— one that’s completely safe might I add.”

It is common knowledge that Mr Comfort and Mrs Raicht are both interested in cells, given that they are biology teachers. When discussing the differences in human cells vs. plant cells they were inspired to ask the question: what would a combined version of those cells look like?

After a considerable amount of talking, they immediately began human trials on students. Students were able to come to the biology rooms during activity period and get chloroplasts injected into their arms. They were then reasonably asked to give up their lunch periods to stand in the sun, with their arms out in a t-position so that the chloroplasts could get a good amount of sunlight energy.

“I haven’t felt much yet,” commented Alice Yi when asked about the effectiveness of this experiment. In fact, none of the sophomores have noticed a difference, besides green spots appearing up and down their arms.

Besides that, many sophomore teachers have noticed a lack of focus from their students. This could be due to students no longer eating during their lunch periods, but Mr. Comfort and Mrs. Raicht have asked us to refrain from making any assumptions on this matter.

For participation in this experiment, students will be awarded one extra credit point. Two points will be given to those who successfully complete photosynthesis. These points can be used on any test the students have taken this year. “We almost felt like we were giving away too much, but eventually decided it was a fair reward for the extra work our students were doing,” says Mrs. Raicht.

For the time being, there is not a lot of information on the success of the experiment, as it is only in its third week of trials. Mr. Comfort gave us some insight on his hypothesis for the project. “I assume that progress will start to show around the eighteenth week of trials. Until then, we just have to wait and see.”

Mrs. Stoich - December 18, 2019 0
Is it aliens? Could it be the ghost of Ren McCormack from the 2017 production of Footloose returning to strike his revenge on act II? Or maybe, in a twist of fate, it’s our Italian overlords, seeking justice for their stolen tiles, now laden throughout our building’s bathrooms.