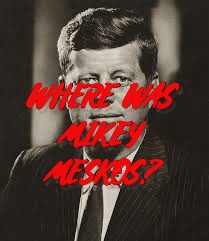 In a scandal to rival Watergate and the Great Chinchilla Crisis of 2012, sophomore class presidential candidate, Michael Meskos, is refusing to release his tax returns. The school was left to ponder what Meskos could be hiding for a confusing two hours before the tax returns were leaked to Yampage revealing shocking information: Mikey Meskos has paid zero dollars in taxes in the last 15 years.

“That’s dishonest,” sophomore and opposing candidate Sabina Hege told Yampage. “He can’t expect us to vote for someone who would withhold that type of information. And that’s why you should vote Sabina Hege for sophomore class president.”

“I’m very disappointed in Mikey. He’s really compromised the integrity of the sophomore class election,” sophomore student government advisor Donna Oppedisano stated in an interview. “I really wish I had volunteered to advise the junior class student government instead this year.”

At press time, Meskos could not be reached for comment, but his overworked and highly caffeinated campaign team assured voters that he would not be withdrawing from the race.

In addition to his refusal to answer questions about his taxes, the candidate has also never publicly spoken about where he was when President John F. Kennedy was assassinated.

In other news, Meskos’s ties with F-M are still being investigated.

Katrina Aimée Naimes - February 3, 2021 0
When asked why they did it, they simply said, “I just wanted to see if it actually worked. Plus, I was feeling petty at the time because I had gotten a bad grade in that class.”