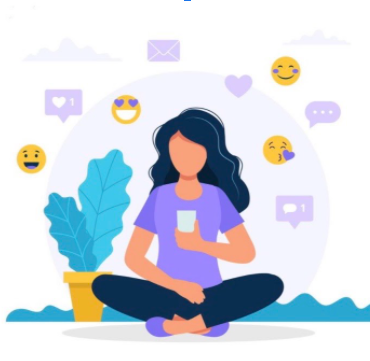 Today’s world is increasingly gravitating towards a center around the media. One of the most popular forms of this, social media, is undeniably taking over the lives of the younger generation. While social media offers many benefits such as staying in touch with distant friends and relatives, openly expressing thoughts and opinions, strengthening social awareness, not to mention a favorable way to cure boredom, it’s easy to overlook the many detrimental effects that social media has on youth.

Education has been greatly impacted by social media. The many technological  advancements made in the past few years have allowed quick and easy access to social networking sites for research information. Although this attainment seems helpful in the moment, a lot of the information found is inaccurate or biased which pulls students into an incessant trap that results in a waste of time. Still, rather than using verified and reliable research sources that take effort to understand, students favor the use of media, which gives them all of the information they think they need in just a few quick blurbs. Combined with a loss of motivation from the time spent staring at a screen, this “scratching the surface” of understanding has caused a noticeable drop in students’ grades.

Another area that has been greatly affected by social media is health. A large number of children and teenagers spend countless time endlessly scrolling through social media platforms such as Instagram, Snapchat, Twitter, and TikTok that they often skip meals and sacrifice  sufficient rest. The same social media platforms previously mentioned are filled with unrealistic images and videos distorted using photoshop, which, in turn, resulted in an increase in insecurities and eating disorders such as anorexia and bulimia. There’s also the obvious factor of cyberbullying, which has affected over half of the younger generation and includes the false spread of gossip and rumors. These untruths have the potential to cause depressive and suicidal thoughts in those being bullied.

Social media also impacts relationships within the younger generation. Through the use of phones and computers, children and teenagers no longer feel the need nor have the motivation to spend time with friends and family face-to-face. This lack of personal interaction decreases relational abilities which are critical to long term achievement and successes, as well as the capacity to connect with others in person. Social media opens up an entire world which offers the younger generation many role models, however, also exposes them to strangers with bad intentions. Kidnappings, murder, and robbery are just a few examples of crimes that have been committed through sharing details on social media.

A final area that social media affects is reputation. With a single misinterpreted post, picture, or video, an entire life can be ruined, especially today. It’s near impossible to escape the media now that it surrounds the entire world, and therefore, a mistake is much harder to rectify. Through the use of message boards on almost every platform, any user can comment their thoughts and feelings, both positive and negative, towards someone else. These thoughts and feelings can gain support, and cause a victim’s expansive social drawback.

The examples of the detrimental effects on education, health, relationships, and reputations are only a few of the many that result from the use of social media. Although today’s use of social media leads down a concerning path for the outcome of the future, it can be used for good. We, as the younger generation, have the power to change this future and bring social media to the greatness we all know it can be.

Students Are Being Overburdened With Too Much Homework

Refugees Are Begging While America Turns Its Head

The Hidden Costs of Sugar