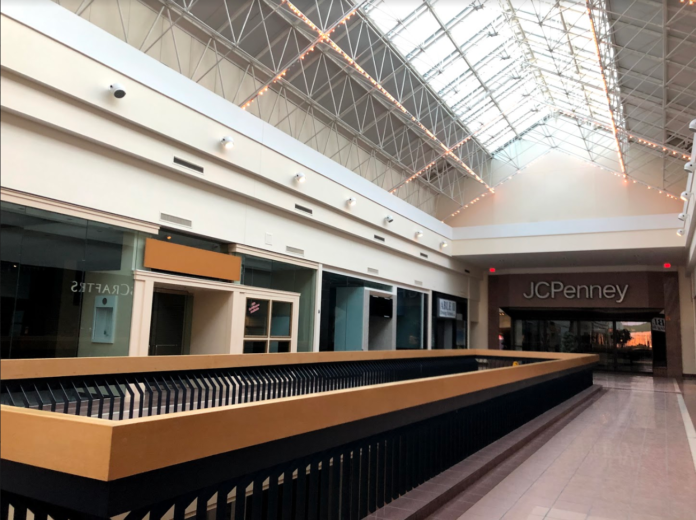 Should Shoppingtown Mall even be considered a mall with only seven stores remaining?

A formerly popular mall in the Dewitt area, Shoppingtown mall, was opened in 1954. Originally it was a strip mall owned by Wilmorite Properties, but it was enclosed in 1975 and is now owned by MoonBeam Capital. Now, there are only seven stores left, and the mall’s anchor is the Regal Cinemas movie theater. By 2016, it lost the majority of it’s anchor stores. For example, Sears was the last anchor store in the mall, but was closed towards the end of 2018. Dick’s Sporting Goods also moved locations to the Erie Canal Centre in 2015. Along with this, Macy’s Department Store closed in 2015 with J.C. Penney following, closing in 2016.

Shoppingtown Mall used to be buzzing with people rushing in, and out of all the stores. Students from Jamesville-DeWitt High School would usually go there instead of Destiny USA, a mall located in more downtown Syracuse, because it was closer and more convenient. “I wish Shoppingtown was still there because sometimes it can be kind of a pain to go to Destiny USA,” said freshman Kathryn Donaghue.


“I wish Shoppingtown was still there because sometimes it can be kind of a pain to go to Destiny USA,”

So far, 2019 has brought no new plans for Shoppingtown. Many argue over how it should be turned around into a useful place that would benefit our community. Students at Jamesville-DeWitt High School have some ideas on what the mall should turn into. Many J-DHS students think it could be turned into a sports center because there aren’t enough sports facilities nearby. Considering how common student athletes are at J-DHS, many people find it very inconvenient that all the fields are so far away. Freshman Janis McPeak plays indoor soccer and said she has to drive an hour away for some of her indoor soccer games. If Shoppingtown mall was turned into a sports center, this would make it much easier for athletes like McPeak to train locally.

This sports center could include a lap pool, hockey rink, indoor track, basketball court, indoor and outdoor softball and baseball fields, and soccer and lacrosse fields. Also, right now CNY Gym Centre, a gymnastics center, is located in Shoppingtown Mall already, so they wouldn’t have to relocate.

J-DHS students also came up with the idea for an indoor entertainment space, mainly for kids or teens. The entertainment space could include many fun things like an arcade, go-karts, a trampoline park, playground, movie theater or an inside roller coaster or water park. Although places that include these things are within driving distance, they aren’t all in one place. It would be more convenient if they were all in one place and could give kids many options on what they wanted to do when they went. “There aren’t a lot of places kids can go that have activities specifically made for them,” Sophomore Amelia Zumbuhl said. There would also be an area for parents where they could just hang out while their children have fun.

Shoppingtown Mall could be turned into a space that could benefit our community instead of taking taking up useful space. Should Shoppingtown Mall even be considered a mall with only seven stores remaining?

The 2020 Budget and School Board Vote