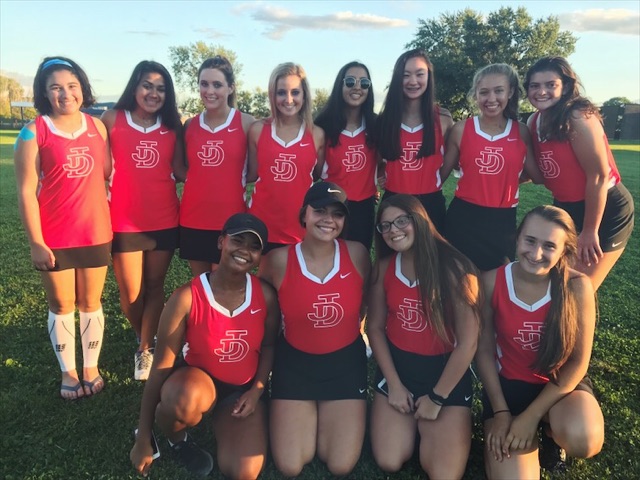 The Jamesville-DeWitt High School Varsity Girls Tennis team began working hard as soon as they stepped on the court this 2018 season. They have played 12 games, losing only twice to their biggest rival Auburn. The Red Rams are focusing this season on getting better and working towards team success.

The team consists of 13 players and each contributes to the success of the team. Varsity Head Coach Eugene Sul said that, “The returning players are better than they were last year.” Tara Pollock, a two year varsity player is also improving everyday, and Coach Sul has high hopes for her even though she is still only in 8th grade.

Along with building skills to use on the court, the team has built friendships that will last outside of the season. “Tennis has definitely helped me get to know more people in the school and I’ve made some really close friends through playing,” said senior captain Anna Sofia Hege.

The team is preparing for the Section III tournament at the end of the season, where they will be facing more difficult opponents in Section B. Senior captain Shannon Beaudry said, ”I’m definitely looking forward to getting revenge on Oneida in the doubles for sectionals after our loss to them last year.” The Red Rams are determined to get further in sectionals this year, after all girls were defeated in the first round last year.

Boys Soccer Kicks it up a Notch