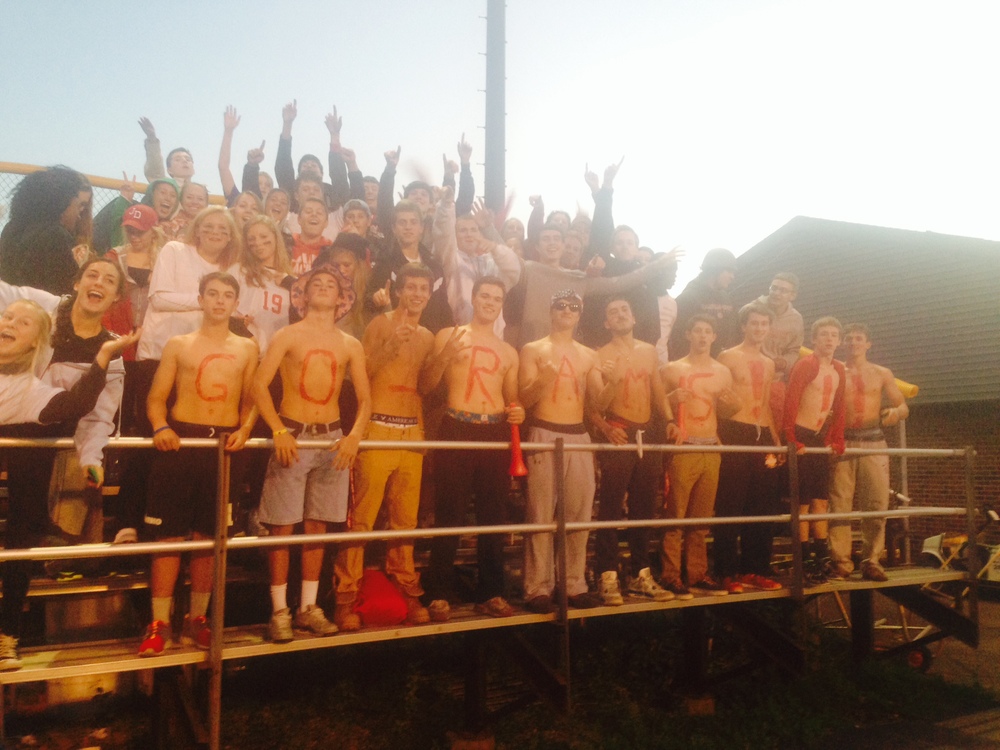 On Sept. 26, Jamesville-Dewitt High School principal Paul Gasparini announced to the entire student body during a pep-rally that President Barack Obama, after catching word of J-DHS’s spirit at the East-Syracuse Minoa football game, declared the J-DHS student section the best in the nation. Mr. Gasparini’s statement was met with an uproar. Although his comment was facetious in nature, Mr. Gasparini stands by the idea that J-DHS is the best, saying that “if the president was able to vote for us, he would.”

Thus far, the 2014-2015 J-DHS school year has been prominantly defined by one thing: pride. Whether it be a football, volleyball, soccer, cross country, gymnastics, tennis, or swimming event, all types of students have been showing up to support their fellow Rams. Even more surprisingly, this pride isn’t territorial, as students have even been cheering on J-DHS’s sports teams at away contests. But what has sparked this sensational increase in pride?

Football runningback, junior Michael Schwedes, struggled to find an answer to the question. “I couldn’t tell you [what caused the increase in pride], but it’s not like our teams were doing much better,” said Schwedes. In fact, across the board, sports teams have shown little to no increase in success compared to last year.

Another football player, junior Connor Flanagan, corroborates Mr. Gasparini’s statements, saying that the current senior class has sparked J-DHS’s emergence of pride. “With the loss of last years seniors, people are definitely trying to step up,” said junior Samantha Leavitt. Flanagan jokingly said that the laconic senior Matthew Murad was able to “round the entire school around a single cause, and it spread from football, to volleyball, and to soccer.” Sophomore Emma Gibson agreed, saying, “Murad is the heart of the student section.”

However, this may not be too far from the truth. Murad, who isn’t locquacious at the sporting events, is a subject of the majority of cheers during them. For example, whenever Murad’s lacrosse number, 36, appears in any shape or form on the scoreboard, students chant the number. Flanagan said the rallying around Murad is due to his hard-working, yet humble character. The Murad way “is something to live by,” said Flanagan. Be it from the courts to the fields, the 36 chant has become commonplace at J-DHS sporting events.

Seniors Ben Wipper and Brian Cieplicki have been credited with bringing the Murad-centered student section into full force. Sophomore Mary Dorazio believes that their success in cheering is caused by them being “great role models to the younger kids.” The Wipper and Cieplicki tandem could’ve been seen at almost every sporting event this season, bringing gusto and enthusiam every time. “They have been the two main leaders of the student section at the varsity volleyball matches,” said junior Ryan Mandelis. Mandelis added that the 36 chant by Wipper and Cieplicki really motivates the players because “it reminds us of how we should carry ourselves on the court.”

Mandelis even noted a time when Wipper and Cieplicki, who were the only two attendees of a volleyball game, brought the same intense enthusiasm from start to finish. “Someone has to do it,” says Wipper; “I have J-D pride running through my veins, and I put that to work every event that I go to.”

With the fall season of sports wrapping up, teams are now beginning to enter into their sectional tournaments, Wipper has no doubt that teams will continue to be successful. Similarly, Mr. Gasparini believes that due to this tremendous amount of encouragement by students, athletes are, “never going to let down, give up, or become disheartened.”

No matter the outcomes, Mr. Gasparini revels in the fact that J-DHS has such a selfless and enthusiatic student body that makes every single student feel good about themselves. “I’m really proud of the students here, and I feel blessed every day that I come to work,” said Mr. Gasparini.

Tough Transitions for Indoor to Outdoor Track This Year

The Super Bowl Comes to the Big Apple