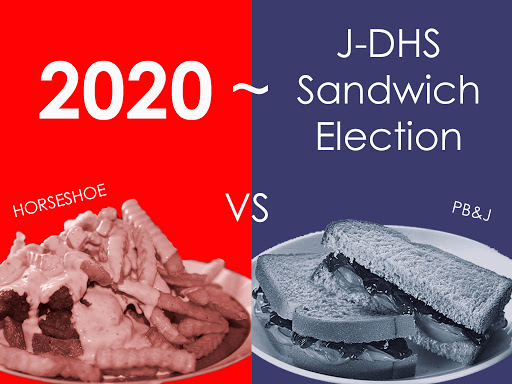 While most people here in the United States were focused on the presidential election, one J-DHS club, the Official Sandwich Club to be exact, had been putting all of their energy and thought towards another election entirely: the Quadrennial Sandwich Election. Why, you ask, did these students find sandwiches to be more important than the next president of the United States? Well, to be honest, we here at YamPage find the answer to that question to be both too simple and yet almost unanswerable.

Now, what exactly is the Quadrennial Sandwich Election, you may be asking yourself? To answer your question simply, it is the most prestigious event of the J-DHS extracurricular calendar. Every four years, students from all grades band together to vote for the next inductee into the renowned Sandwich Hall of Fame. Located in the stairwell between the main gym entrance and the main gym itself (a stairwell around two percent of the J-DHS population even knows about), the Hall of Fame hangs in all of its glory, featuring sandwiches from the classic BLT to the less known, but equally delicious Albuquerque Canyon Flop.

Ever since it was announced by the officers of the Official Sandwich Club (a small group which remains highly anonymous) that yes, the election would persist despite the worldwide pandemic, the hallways and texts of students (and staff) became aflutter with the news. And as November 3rd (both National Sandwich Day and the date of this prestigious election) approached, tension filled the air.

This year’s possible inductees were narrowed down to a very opposing set of two: the classic PB&J (which surprisingly hadn’t been inducted yet despite its two previous attempts) and the undeniably-American Horseshoe Sandwich (we’re talking hamburger patty, french fries, and cheese sauce all slapped onto one piece of bread).

Each side had its own devoted supporters. Sophomore Brayden Cirman passionately told reporters, “It’s either PB&J or nothing. J-DHS doesn’t need another heart attack on a plate! I don’t care if PB&J is considered ‘safe.’ It’s a classic and it’s delicious!”

However, junior Stefan Wang had much to say in defense of the Horseshoe Sandwich, “All this ‘heart attack on a plate’ nonsense is getting annoying. Who cares if you’ll get a heart attack later, it’s all about the taste in the moment! So what, peanut butter has healthy fats and protein? French fries have delicious fats and I took biology last year, so I never need to worry about stupid proteins again.”

This passion led to a very close race. While the sophomore class leaned towards the PB&J, the senior class was almost guaranteed to vote majority Horseshoe Sandwich (in the words of one senior, “I’m leaving this place, so I couldn’t care less. I played horseshoes once, so sure, I’ll give it my vote.”). Typically called the PITA grades (PITA standing for Pain In The… Aardvark of course!), the junior and freshmen classes were much more questionable due to their lacking decision-making skills (the juniors’ caused by their constant switching between safety and reach schools and the freshmen’s caused by their constant need to please their upperclassmen).

As the committed vote-counting students (who were totally not doing it for their mandatory volunteer hours) tallied up the votes, one progressive student attempted to find a way for the two factions to meet in the middle. Freshman Sophia Caputo told us, “With all the stuff that’s already on the Horseshoe’s single piece of bread, who would even notice if someone were to add some peanut butter and jelly? We’ll call it the… ‘Double H,’ meaning… Healthier Horseshoe!” We left soon after that statement as Caputo seemed a little too proud of her alliteration alteration.

Unlike Caputo, however, most students found themselves silently praying for the victory of their side for the entire 15 minutes it took for the votes to be counted. And when the final vote was counted and it was announced across the intercom that PB&J had won, 50.1 percent of the student population immediately leapt to their feet in celebration (we’re ignoring the 36-second delay it took for the in-school students to rapidly type ‘pb anf j won !!’ into their phones and send it to their remote friends).

While some Horseshoe voters called for recounts (all six of which didn’t change the victor), many PB&J voters found themselves muttering thanks to the God who had prevented them from moving to F-M in disgust. Sophomore Cielo Martinez told us, “I’m just glad I was able to be here when PB&J finally got inducted. It may be forgotten by history, but at least it ended the long reign of weird sandwiches named after Looney Tunes characters.”

Throughout the next couple of days, the sandwich buzz gradually died down. Oh, and Joe Biden won the presidential election.

Malone Holds on to Beat Jennings in Inaugural Matchup of the...