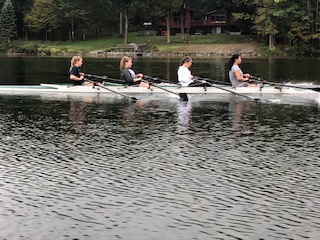 Rowing is a sport that is more recently becoming more and more popular with high school students. Although Jamesville DeWitt High School doesn’t currently have a crew team, some J-D students row for club teams outside of school. However, managing school work on top of a club sports team can be difficult, and transportation takes a lot of time.

Junior Lillian Woods rows for Cazenovia Rowing Club, which practices on Cazenovia Lake, a twenty five minute drive to get to practice every day. She started rowing in the fall of her sophomore year for Chargers Rowing Club, and switched to Cazenovia in the Spring of her sophomore year. “I don’t think people know that crew is a sport that’s accessible for them, and that there are teams around.” said Woods. Freshman Abby McGuire, a rower for Cazenovia Rowing Club and Chargers Rowing Club, agreed. “I think not many people row crew because we don’t have a team here at our school.” said McGuire. Junior Skylar Hardt started rowing in the Spring of her Junior year for Cazenovia Rowing Club. “I think people might take interest in rowing if their school had a team right there for them to join.” Hardt said. If J-D were to start a rowing team, all three students believed many others would join.


“‘I don’t think people know that crew is a sport that’s accessible for them, and that there are teams around.'”

J-D combines teams with other schools for sports such as wrestling, gymnastics, and hockey. Woods believes that crew could possibly be a sport that J-D combines with another school for. Neighboring district, Fayetteville Manlius currently has a crew team, which practices on Onondaga Lake, and their school could possibly be a team for J-D to join with. F-M and Chargers Rowing Club are run by the same coach, however, students that do not attend F-M can not row for the school team, only the club team. Chargers Rowing Club only has seasons in the summer and fall, while F-M’s school rowing team has its seasons in the winter and spring. Since J-D rowers can’t row with F-M in the winter training season and spring scholastic seasons, some students believe we should join teams with F-M, much like we do already for gymnastics, and wrestling and hockey with Christian Brothers Academy, another neighboring school. “I think we should combine teams with F-M, since they already have a good team with coaches and a boathouse, and it would be less expensive than starting our own.” Woods said.

On the opposing side, McGuire thinks that J-D should start their own team instead of joining forces with F-M. “I think it would be more beneficial for J-D to start its own team, since other teams such as F-M are already so big.” said McGuire.“If J-D started it’s own team, I think it would be better because we wouldn’t have to drive as far everyday to get to practice, and the team would be right here.” Hardt also thinks the same, reasoning that the drive would be easier to manage. “If J-D started their own crew team, the drive would be less of a problem to manage… also, we would have much more time to do our school work, since we would get home sooner. School teams are always easier to manage time with than club teams.” Hardt said.

Either way, whether J-D combines with another school rowing team, or starts its own, student rowers think it’s time to finally get on board with the growing sport of rowing crew.

May Student Photos and J-D Day

ABOUT US
RamPage is the student-run newspaper of Jamesville-DeWitt High School. We provide a platform for students to share their ideas, learn about their world and community, celebrate their accomplishments, and engage in the free and open exchange of information required in a democratic society. All students, clubs, activities, and teams are encouraged to contribute to our publication.
Contact us: jdrampage@jd.cnyric.org
© 2021 | JDHS RamPage | All rights reserved.