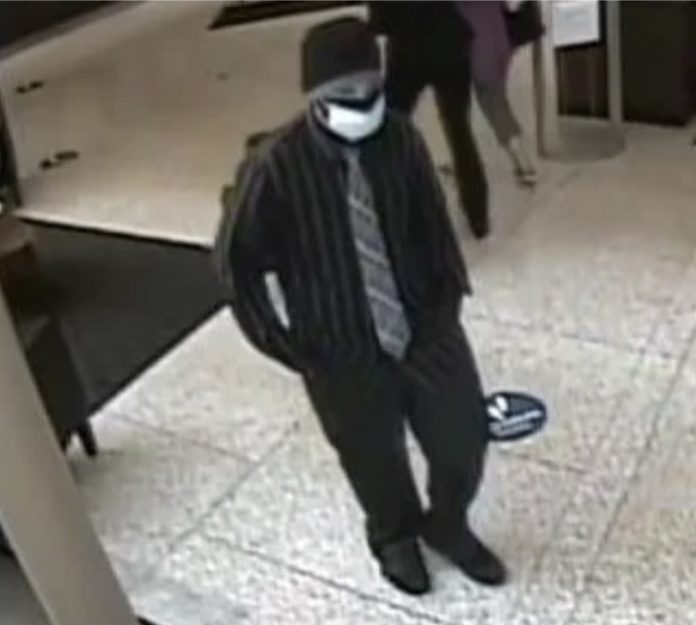 On Friday, September 17th around 4:10 p.m. local Chase Bank on 4425 East Genesee St. was robbed by an unidentified suspect. Security camera footage shows the suspect walking into the bank, handing the teller a note of some sort, then proceeding to steal money. Very little information is known at the moment, including if the suspect was carrying a weapon.

The suspect is presumed to be a white man who was wearing a dark striped dress shirt with a purple tie, dark-colored dress pants, and a winter hat. Due to the man’s multiple face coverings, the police have yet to identify the suspect.

Multiple DeWitt officers with K-9 units and county sheriffs responded to the scene shortly after the man fled, however how the police found out about the robbery is still unknown. Many presume the man escaped through the woods near the bank after multiple locals reported seeing officers go into the woods with K-9 units. This is notably relevant due to the access the suspect could’ve had to J-D families residences and possibly Moses Dewitt Elementary School.

For now, the DeWitt police cannot release any more information for the sake of it still being an open investigation and the suspect has not been identified nor caught. The possibility of this being the same man who robbed the Citizens Bank nearby is still on the table. Due to the recent events, DeWitt police have encouraged local banks to up their security measures as a pattern could start to develop.

As of Tuesday, September 29th, DeWitt police have arrested a man who has since confessed to the robbery. DeWitt police arrested John J. Revette at his home and charged him with robbery in the third degree and petit larceny. Besides his confession, police found evidence in Revette’s home that ties him to the robbery. The amount he stole is still unknown. As of now, Revette is in police custody awaiting arraignment.

Normally the Snowiest City in the Country, Syracuse’s Snowfall is Far...