By Jason Klaiber and Mohamed Sahraoui 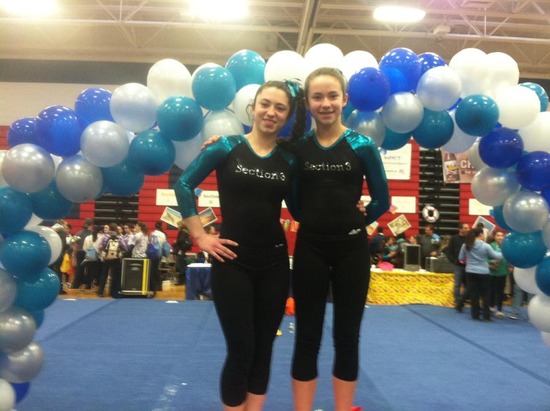 Gymnastics is (and some might say, unjustly) outshined by sports such as lacrosse and basketball at Jamesville-DeWitt High School. While her sport has remained somewhat under the radar in the past, junior Taylor Riley has nonetheless drawn attention from coaches and students alike with her athletic prowess.

Riley has been participating in the New York State High School Athletic Association for Women’s Gymnastics ever since she was in middle school. This will be her fourth straight year at the competition, participating alongside her sister, Payton, an eighth grader at Jamesville-DeWitt Middle School, who will be contending for the state championship for the first time. The Riley sisters are the only members of the Rammets representing J-DHS on March 2 in Albany, NY. “It’s annoying sometimes, because she’s my sister, but it’s definitely fun to have her on the team and I get to show her what it’s like,” said Taylor, who is three years older than her younger sister.

Taylor will be competing in all four events of the tournament: vault, uneven bars, balance beam, and floor. Although she is familiar with the tournament, the atmosphere is still competitive and stressful. She feels she has “somewhat” adapted to the feeling of competing the more she’s involved in competitions. “Each year is different depending on how my season has gone and my injuries and that kind of thing, but for the most part it’s pretty much the same,” said Riley.“It’s different than the (meets) for the school,” she said; “The ones at the school aren’t as nerve-racking as states and my normal meets so it’s definitely a lot more pressure.”

In addition to the team award, there are individual awards for each event as well as the all-around performance. However, this upcoming competition, which is also the last meet of the year, is seen more as a team effort. “It’s different than normal meets because in normal meets, it’s usually like you’re on a team but you’re individuals as well,” said Riley; “In this one, it’s more like you’re a whole team and it’s not as much an individual meet as they are on a regular basis.” Riley expects about six competitors in each event and 11 or 12 different school districts to be present at the meet. “Most of the girls we compete against we know from club teams, but in season our greatest competition is New Hartford and Whitesboro,” said Riley. The state championship involves girls from these particular school districts and various other schools coming together to compete.

Considering the high level of opposition from other schools, the Riley sisters have constantly prepared for the competition. They practice year-round with their club team and their Varsity team, even though the season ends in the fall. “I go to a club with my gymnastics team every day of the week, all year long,” said Taylor. More specifically, the gymnastics team trains at Blaze Gymnastics, located in North Syracuse. Of course, Taylor and her team plan to continue this routine until the day of competition. She placed second overall in the state competition last year, and hopes to improve to first place. Taylor’s dedication and performance skills have been beneficial, lifting her to the top of her sport. Riley has found herself becoming a leader for the inexperienced, younger members of the team, taking the place of the graduated seniors. “In past years, I was the one looking up to some of the seniors so it definitely changes every year.”

Along with the leadership role she now plays on the team, Taylor has formed strong personal bonds with her coaches. She trains under two coaches from separate teams: high school coach Tracey Fishkin and club coach Sharon Cochardo. Coach Fishkin, who is her main coach, not only helps her build up her skills as a gymnast, but also teaches her how to become a better person. “(Coach Fishkin) knows how to motivate everyone on the team,” said Taylor; “She’s very good at adapting to each person and not generalizing everything.” Each member of the team fits a specific role. Taylor is known as more of a “powerhouse” for her team while her younger sister is “more graceful.” Riley said that her coach has increased her confidence in her respective gymnastic events, while teaching her how to improve in certain areas. Improvement and preparation will come as advantages in this competition.

What Happened to the School Store?