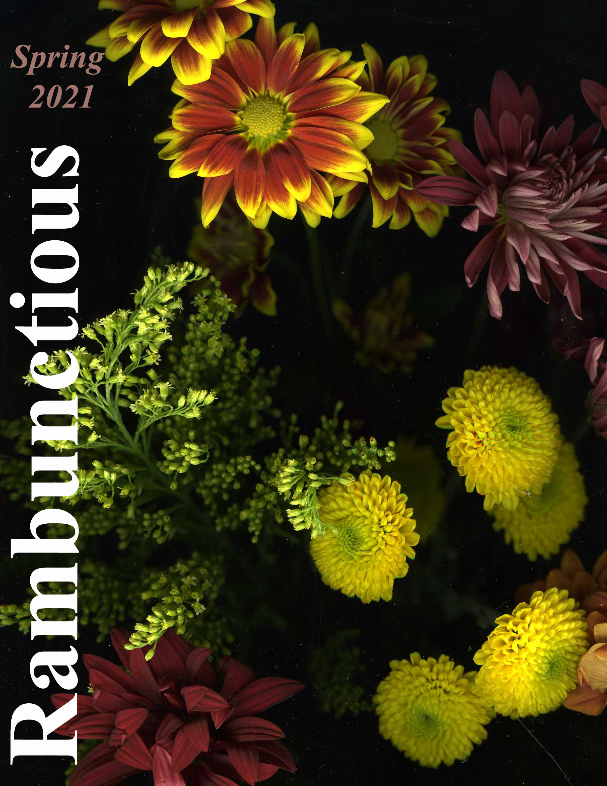 Although they faced many challenges when creating the magazine this year, the Rambunctious Literary Magazine staff was still able to design spreads featuring a variety of student writing and artwork. While it was difficult to juggle changing meeting times, the combination of fully remote, hybrid, and in-person club members, and technological difficulties, the staff was still able to create a final product, though it was a little different from the magazines of previous years.

Usually, the magazine is printed and distributed in-person to students and teachers around the building. However, this year, the editors chose to publish and distribute the magazine digitally. This wasn’t a disadvantage though. “Because we didn’t plan to print the book (even though we were still thinking of the design in terms of two page spreads), we were able to do some things that we wouldn’t have done in print—fully black pages with white text (that would use lots of ink in print) and a spread with a photo across the middle (it would have been the gutter in a print book),” explained the club advisor, Ms. Myers.

But because the staff was still designing the magazine the same way as in a usual year, it remained a large time commitment and required the same software. But while software like Adobe InDesign is definitely important in the process of making the magazine, it’s truly a collaborative process, with the club meetings being a very important time to discuss design ideas for the magazine and to organize the work. “Only having half of the students in school on a given day made it hard to have club meetings since the software that we use is only on the school computers,” said senior Emily Tollar, one of the editors of the magazine.

Since there were a number of club members at home at any given meeting, programs such as Zoom, Google Meet, and Jamboard became important to the process. For example, when designing the “floor layout” (the initial arrangement of the art and writing going in the magazine typically done on either the floor of a classroom or of a computer lab), Jamboard and Zoom were both used. “It was less organic and less collaborative, but it worked in the circumstances,” said Ms. Myers.

While the process posed some difficulties, it was a good experience for everyone involved. However, the club does look forward to working together in-person as usual when possible and returning to print magazines.

Enjoy the Spring 2021 Rambunctious in the viewer below.

The Evolution of The Oscars