RamPage
Home Archive J-D’s Not ‘Playing’ Around This Week

By Anthony Cacchione and Bob Wason 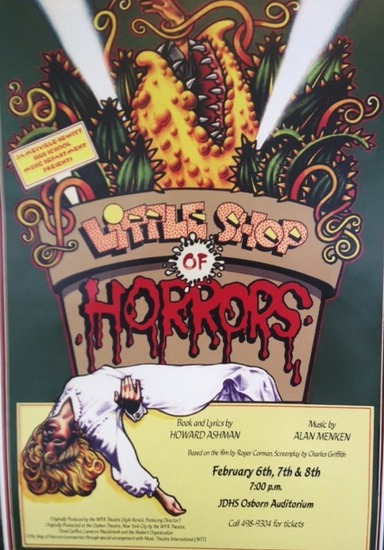 Better watch your back, J-D, there is a man eating plant on the loose. The Jamesville-DeWitt High School Music Department will put on “Little Shop of Horrors” on Feb. 6, 7, and 8. The play is produced by Brenda Neuss, musically directed by Elizabeth Quackenbush, and directed by Shawn Forster. The orchestra is conducted by Daniel Blumenthal.

The lead of the play, Seymour Krelborn, will be played by junior Jack Harrington along with important supporting roles from senior Maggie Austin, sophomore Jared Adelberg, and junior Chris Russo. The play is a comedy based off the 1960’s film “The Little Shop of Horrors.” It follows a nerdy florist named Seymour Krelborn who discovers an alien plant that grows to be a huge, carnivorous plant that is only focused on drinking human blood. In exchange for Seymour feeding him, the plant helps him gain fame, fortune, and romance. But it soon becomes apparent that the alien plant may have some dark plans for the future.

The play may seem like an odd choice, but Ms. Neuss said the music department chose this play because it seemed more like an “up” show. The previous two plays put on by the department were “Fiddler on the Roof” and “Les Miz,” which were both more depressing, darker plays than “Little Shop of Horrors”. Another reason this play was chosen is because the play has never been done before at J-DHS.

It takes a lot of dedication and hard work from the cast and crew to make the three performances possible. Part of that hard work is the rehearsals, which can last up to five hours. “Practice is long, pretty much every single day after activity period until 8 p.m. But it’s very fun”, said sophomore Collin McKee, who is part of the ensemble. “It’s going to be a great show. We have a great cast and very talented directors and producers. All of the hard work is going to pay off,” said Chelsea Colton, who plays Marvellette, one of the narrators.

“I’m so excited for the play, but there is a lot of pressure on the entire cast,” said Harrington, who plays Krelborn. “(Being the main character) is definitely a challenge, but everyone’s job is tough. As long as I focus on and study my lines, I will be fine. And I know everyone else will be ready, too.”

The two stage managers, juniors Hannah Gibson and Josh Gutmaker, also play a big role in the play. They are in charge of the crew and keeping the back stage in order. “Practice is long and intense, but fun. It’s going to turn out really good because everyone is working really hard. Josh and I are really working hard to make sure the crew is ready,” said Gibson. “I’m so excited for the play. Everyone is working so hard, I just know it is going to be fantastic. My job is not that hard, because we already have such a great crew,” said Gutmaker.

The optimism isn’t just limited to the cast and crew. Ms. Neuss said, “the play will be fabulous. The audience will love it. We have a great production staff and fantastic special effects.” Musical Director Elizabeth Quackenbush said, “I’m so excited for the play. All of the cast and crew are working very hard and it will pay off for them.”