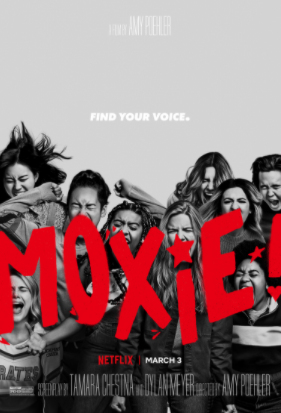 On March 3, 2021, Netflix released the movie adaptation of the popular book Moxie by Jennifer Mathieu, starring Hadley Robinson, Patrick Schwarzenegger, Amy Poehler, and many more talented actors and actresses. The story follows Vivian, a high school junior who has grown up in her small Texas town for her whole life. Inspired by her mother’s rebellious past, she anonymously publishes a zine to call out the normalized sexism at her school. Throughout the process, a group of girls form the club “Moxie” and are determined to make their voices heard. However, throughout the entire story, no one knows that Vivian is the creator of Moxie, and as a shy and reserved girl, Vivian will do anything to make sure that secret does not get out.

There are many topics addressed throughout this movie that are not always addressed well in other movies, including sexual assault, rape, and sexism. Moxie addresses them in a way that is perfect and relatable for any teenage audience that has also dealt with these issues. Oftentimes in movies we see these topics glamorized and hardly paid attention to, but what makes Moxie so captivating to watch is that they are just a normal group of girls, but they’re determined to flip the social standards of their school. Any viewer that watches this movie is going to walk away from it feeling inspired by the wit and willpower that the girls have to make their voices heard.

The main things that set this movie apart from others are the character development and how almost every kind of person is represented in the movie. Vivian plays the shy girl at first but then develops as a strong and independent young woman through her anonymity of being the creator of Moxie. Poehler plays Vivian’s mom, Lisa, who is a single mom trying to navigate raising a teenager, getting back in the dating scene, and working as a nurse. Her character resonates with viewers because she is funny but also is dealing with her own issues while having to stay strong for Vivian. Alycia Pascual plays the new girl at school who is rebellious and thinks the sexist behavior at their school is unjust. She quickly befriends Vivian and they work together to take down the patriarchal system that has been occurring right before their eyes. Another character that I felt added a lot to the story was Mitchell, the main antagonist of the story who makes all the girls uncomfortable and is really just the guy that thinks everyone loves him, but really no one can stand him. The school puts him on a pedestal, especially the principal, and he has the biggest ego because of his status as the quarterback on the football team.

Personally, my favorite part of the movie was getting to see many different characters become friends throughout the movie because of their shared determination to call out sexism at their school. We see Vivian become friends with the loud and outgoing feminist, Lucy, as well as the head cheerleader becoming more than just Mitchell’s girlfriend and even joining the Moxie rally that takes place at the end of the movie.

Overall, the movie Moxie addresses harsh topics with poise and respect, and is relatable to any teenage audience. The characters are well developed and make the movie stand out so much from other movies on Netflix right now. Moxie is inspiring and powerful, and if you haven’t watched it yet, you are definitely missing out.

We Live in a Society: The Album