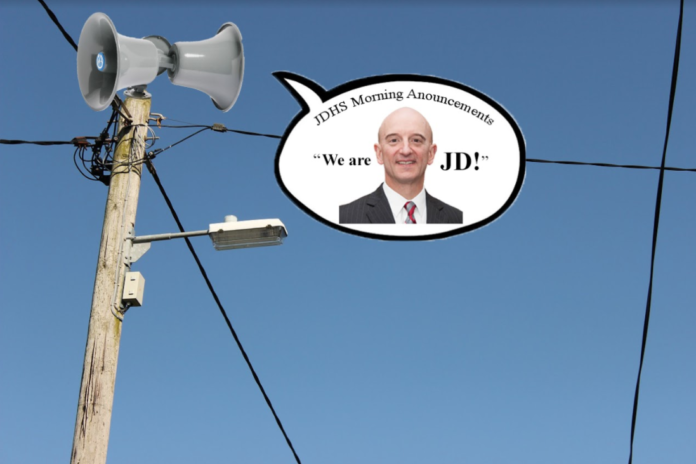 Have you been missing the resonating sound of bells ringing every 82 minutes? The timbre of Mr. Gasparini’s voice at the start and end of each day? The repeated reminders not to wander the halls during activity period?

Fear not. We have it covered. We are JD.

“We noticed a slight dip in our students’ productivity and focus since school closed,” Mr. Gasparini told YamPage staff. “We knew something very important was missing from our students’ lives, so my fellow administrators and I drew the only possible conclusion we could; our students were missing the sounds of the school day.”

A very detailed and elaborate plan quickly came to fruition. While students were rigorously studying at home during the month of April, JDHS staff were asked to carefully install a network of loudspeakers throughout JD neighborhoods. After every square inch of the district was within hearing distance of at least one loudspeaker, Mr. Gasparini and the rest of the administrative staff would slowly reintroduce the missing noises into students’ lives.

“It’s important not to introduce the sounds too quickly,” Mr. Gasparini reminded us. “We don’t want to overwhelm any student with all of their great memories. Just remembering my fist bumps alone could quickly overwhelm someone with their greatness. We want to ease everyone into it, starting with the beloved morning and afternoon announcements, then adding in the bells, other announcements, etc.”

The loudspeakers were put to use two weeks ago. At 9:12 precisely, there were three dings, followed by Mr. Gasparini’s voice broadcasting the JDHS morning announcements across the school district.

“Just the dinging of the incoming announcement had my mind flooded with all the memories of the good ol’ days, you know, pre-quarantine,” senior Ellie Brown said. “I really appreciate how he’s staying authentic to himself and not changing the announcements for the current situation. I really need something that’s consistent in my life other than my Econ homework.”

Freshman Rachel McCloud told us, “I had just woken up when the announcements came on and for some reason, Mr. Gasparini’s explanation of this week’s Positivity Project trait, fairness, rejuvenated me more than a cup of coffee ever has.”

Across the district, an abundance of positive reactions were noted (ignoring, of course, the confusion from every non-JDHS citizen, but that’s not the point). Administrators saw that as the sign to begin the next phase. After waiting a week for the announcements to blend into daily life, they added in the bell schedule.

That is taking a little longer to sink in.

“At first this whole loudspeaker affair seemed like a waste of time to me, but as time progressed, that Gasparini guy’s voice became a nice alarm for me,” JD resident Rufus Earl Penobscot Jr. said. “I couldn’t hit snooze on his speeches so I was forced to drag myself out of bed. But now, these stupid bells are waking me up at 7:40 in the morning and are occurring in weird increments. 82 minutes? What kind of number is that? Didn’t you learn how to round? Now, my sleep schedule is completely messed up! Thanks a lot. Now get off my lawn before I go get my hose!” We wanted to ask more questions but left the premises when he started moving towards the spicket.

We’ve been notified that we will remain in this stage for a few weeks longer.

“People just need to give the bells some time,” Mr. Gasparini said. “Before they know it, the bells will be an integral part of their lives, they won’t be able to live without them! Once that happens, I’m excited to say that we will be beginning to sprinkle in some extra announcements throughout the day to further boost our students’ productivity. Students need more reminders that ‘We are JD.’”

Over the next few weeks, be on the lookout (or rather hear-out) for more improvements in the loudspeaker system.

“Some pretty incredible things are coming your way, JD,” Mr. Gasparini stated. “After all, this is the best loudspeaker system in the world. I just got a call from the Secretary General of the United Nations, António Guterres, telling me so.”

Digby Thanoscar - April 2, 2020 0
“Hello? Yes, I’d like to talk to Mr. Gasparini, yes I’ll hold… Hello? Yes, this is [ ] and I am calling on the behalf of the student body. I would like to strike a deal. It has been brought to my attention that April break has been canceled, and you see, that will just not do. I will offer you our full cooperation in the future for four days of the break to be brought back. No? 3 days...1 day…..4 hours….2 hours, final offer...6 minutes...Gaspo, gimme something.” The student then hung up the phone looking rather dejected. They then looked up to us and said: “I got us an extra 34 seconds of break.” The student then started to cry.