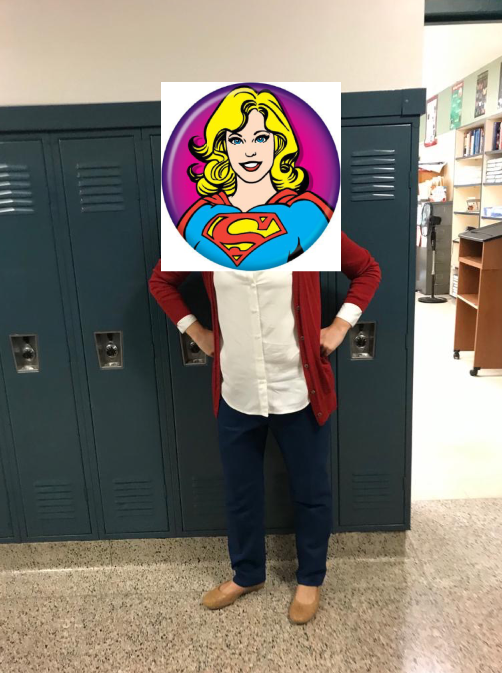 Am I a hero? This is a question we all ask ourselves at some point in our lives. However, Global teacher Mrs. Delaney always knew the answer.

Most new teachers to the district cause students to ask the usual questions. “Where did she come from?” “How can I find her on social media?” and “Will she let me play Fortnite Mobile during class?” However, Mrs. Delaney has raised even more questions. Questions like, “Did she just lift that car?” “Is that my teacher flying over Wegmans?” and “Is it just me, or do her glasses look like a well thought out disguise to hide her alter ego from her students?”

We at YamPage have come to the logical conclusion that Mrs. Anna Delaney is Supergirl.

One freshman said that in the middle of sixth period Global, Mrs. Delaney received a call on her classroom phone. No one knew who was on the other end, but witnesses reported that she began muttering angrily about how Martian Manhunter was “at it again.”

Another student said that her glasses slipped and all of a sudden, she was someone else entirely.

Mr. Gasparini recently spoke to the press about the school’s new teacher. “We are making history here. Can you name any other school with a somewhat iconic superhero teaching their ninth graders? It’s completely unprecedented! That’s what makes us at JDHS the best in the world according to the UN. We are JD!”

This powerful sentiment was met with a standing ovation. However, Supergirl herself was not pleased. “I became a teacher to hide my alter ego, now everyone knows my secret,” the Global teacher ranted, “How did they even find out, I mean I do fly home from school everyday and I did lift my desk with one finger after I dropped my pen, but can’t everyone do that.”

The hire of Mrs. Delaney brings up the question, how many of our teachers are members of the DC Universe? Is Mrs. Eaton secretly Wonder Woman? Is Mr. Adler Batman? Who can know? As always, YamPage will stay dedicated to delivering the truth to the students of JDHS.

In other news, it has been confirmed that Mr. Hartley is not Green Arrow, he was just seen in a green hood with a bow and arrow one time.