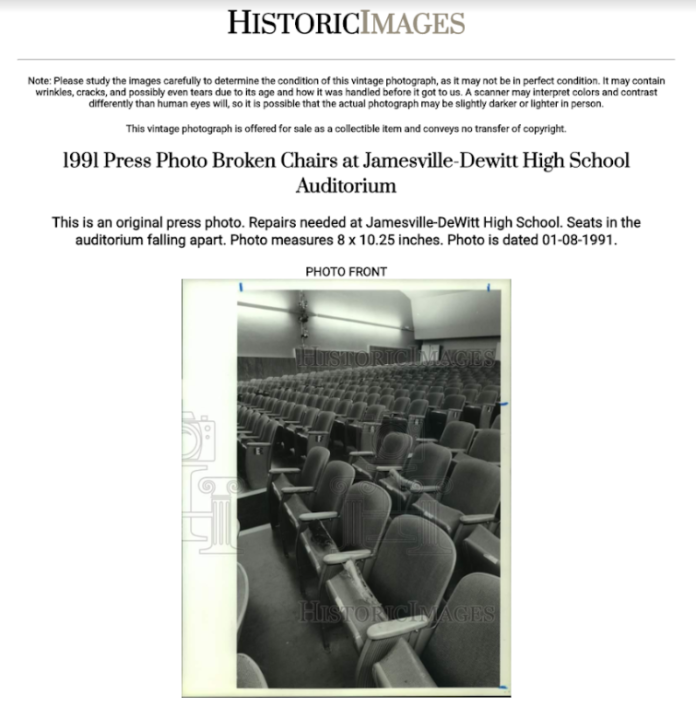 On November 19, the new auditorium held its first concert. However, parents expecting a new high tech auditorium were pleasantly surprised to find that the renovated auditorium had maintained its iconic character.

“It took us so long to get the auditorium to the state we wanted,” said project manager, Addie Torium, “We spent a whole day just chewing gum to place under every seat. We brought in a professional woodworker to etch messages into armrests. Our team had to sit in every seat before we could leave every night to ensure the ‘one million people have sat here before me’ feel that so many theater-goers have grown accustomed to,” the project manager continued with pride, “Only the best for Jamesville DeWitt, ‘cuz the UN and stuff.”

One parent of a freshman attending the concert said, “I’ve only been to Dessert Concerts in the JDMS cafeteria, so I was understandably nervous for swanky high school choral concerts, but when I tripped on the carpet walking to my seat, only to find a piece of chewed gum and ‘we are not JD’ carved into the arm rest, I felt as though I had found my home.”

Other audience members reported inappropriate drawings on the walls, stained carpets, footprints on seatbacks, torn seats, creaky seats, a smelly back row, and every tenth seat refused to go back up after the concert, which took them back to the good ol’ days of the pre-renovated auditorium.

In the concert’s opening remarks from Mr. Gasparini, the principal shared that the next space to be renovated will be the gym. “It will be complete with scratched bleachers, state of the art kickballs lodged in between pipes on the ceiling and the finest pre-crusted mats!” the administrator gushed, “We can’t wait!”

As of this publication, no plans have been announced to unlock any bathrooms.

Josephine Dupuis - December 23, 2020 0
We all know how difficult it is to come up with 2020-relevant Christmas gifts, so we here at Yampage have curated a list especially for this year, based on the challenges and triumphs covered by our staff so that you can have the best 2021 possible.