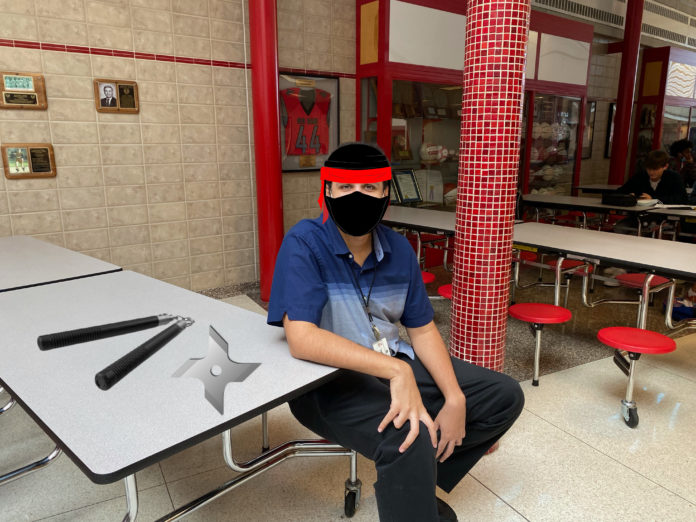 In a bombshell leak from history teacher Vitaliy Yanchuk, it was revealed that popular J-D substitute teacher AJ Suslovic is actually a ninja masquerading as a teacher. Yes, our very own Mr. Suslovic was spotted by Mr. Yanchuk outside of Walmart with a pair of nunchucks.

However, it was not until Tuesday, November 23 that Mr. Suslovic’s secret identity was revealed. Junior Mark Bratslavsky reported seeing Mr. Suslovic changing into his ninja suit in the boys’ locker room. When questioned by Bratslavsky, Mr. Suslovic panicked, stating, “I thought it was still Halloween.”

Bratslavsky captured the moment on video and instantly showed it to Mr. Yanchuk. “As you can see in the video,” said Bratslavsky, “Mr. S is a ninja. It’s undeniable.” Bratslavsky went on to add, “He’s always been my favorite sub. Mr. S passes the vibe check with flying colors. Now I know why.”

“I mean, ‘sus’ is in his name. I always knew something was off about him,” said history teacher Anna Delaney.

According to senior Grace Evans: “This is insane! Now all of us students have a real ninja in our school! Why are we paying for an SRO when we have a freaking ninja!?”

In Mr. Yanchuk’s report, published in an email to J-D parents on Wednesday afternoon, he compiled the mounting evidence suggesting that Mr. Suslovic is, in fact, a ninja. In a statement to YamPage, Mr. Yanchuk stated, “Have you seen the man do a double backflip 360 headshot while using throwing stars? I have.” Mr. Yanchuk was referring to the evidence in the report he gathered by examining security camera footage from the J-DHS fitness center where Mr. Suslovic reportedly trains late at night.

J-DHS Principal Paul Gasparini had to weigh in on the situation, given the backlash from concerned parents about having a ninja with unknown intentions teach their children. “Look, I understand that we are talking about a professionally trained fighter in our school here, but he’s a well-intentioned ninja. Just the other day, he saved a student from imminent danger by eliminating Mr. Ormond’s paraphrasing homework.”

After Mr. Suslovic had time to compose a response, he stated to YamPage on Wednesday, “The truth is… I am a ninja.” Several gasps could be heard from the assembled mass of students at the time. “I know many of you have had me as your substitute teacher before, and I love working at this school. I hope to continue my job here, as being a highly-trained ninja pays very little.”

Ms. Delaney was understandably concerned. “As a history teacher, you have to study all facets of history,” she stated. “As such, I am aware that ninjas were considered dishonorable in feudal Japan.” When Ms. Delaney queried Mr. Suslovic about his trustworthiness, Mr. Suslovic responded, “Have you checked my record?” Mr. Suslovic neglected to mention that as a secret operative, he does not have a public record of his missions as a ninja.