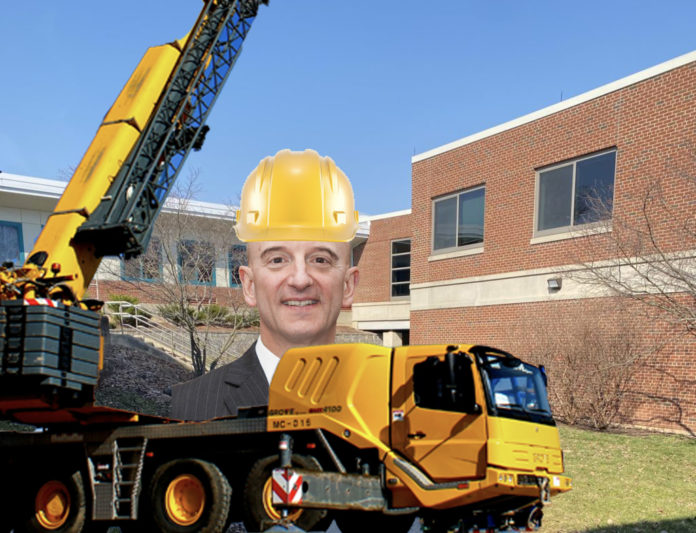 On March 7, a wave of sadness swept through the halls of Jamesville-DeWitt High School as it was announced that Mr. Gasparini would be retiring at the end of the school year. A ThoughtExchange was sent out to serve as a coping mechanism, however, students and staff couldn’t help but feel a sense of emptiness upon hearing the announcement.

“We are J-D and, therefore, we experience emotions as a unit,” Mr. Gasparini stated solemnly. “I know that J-DHS won’t be quite the same without me, but I want to remind everyone that you are not alone in your sadness. It pains me greatly to leave behind the best high school in the world, believe me. That’s why I’m taking part of it with me.”

Mr. Gasparini is referring to, of course, his office which he will literally be taking with him at the end of June.

“He has already started his crane training and is overly excited to be living out his Bob the Builder dreams,” Mr. Nylen told us.

Normally, a disruption this large to the school environment wouldn’t be allowed, however, with all of the construction already going on in the Blue Hall, Dr. Smith’s response to the request was simply: “Sure. Why not?”

The plan is for Mr. Gasparini to take a crane to the main office on Friday, June 24. He will carefully extract his office upward and outward, eventually taking it to his home where, as he told YamPage, he had always planned to add an addition. Because he will be the one operating the crane, he will be liable for any damages to his office, the building, or any Italian tile. While the district is hoping for no more bad press, they’ve guaranteed that when something inevitably goes wrong on the 24th, it won’t legally be their fault.

“There’s going to be a big, gaping hole left in our J-DHS community, and our building,” Mr. Nylen said. “He will truly leave a mark that only a principal like Mr. Gasparini could leave.”

As students and staff continue to waste hours on the ThoughtExchange to distract from their sadness, a coalition of students has already DMed President Biden on Instagram asking to have the soon-to-be crater of Mr. Gasparini’s office set aside as a national monument. They are still waiting to hear back.

While the future of the principal’s office — or what will be left of it — is still unknown, rest assured that YamPage will continue to follow your favorite J-DHS principal like the paparazzi, getting his opinions on only the most pressing, totally real J-D news even when he no longer is associated with the school and has no reason to be quoted anymore.