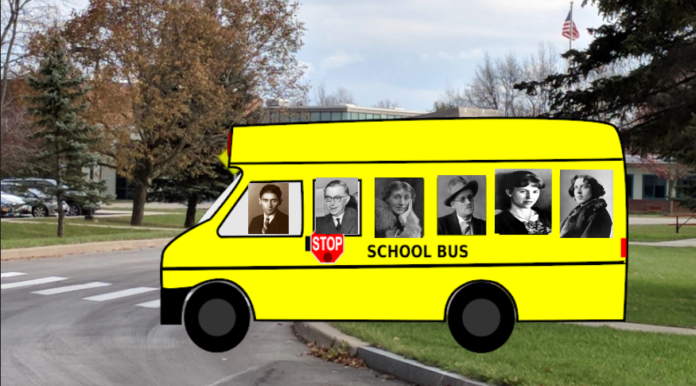 JDHS sophomore, Maya Couto, recently received a Scholastic Art Award. When asked about the inspiration for her revolutionary work of art, she said that it came from a spirited discussion of Kafka’s The Trial on her morning school bus ride, “Of course, we only discuss it in German for authenticity,” the artist stated, “Early twentieth century Eastern European literature is a hot topic on my bus, we’re actually preparing for our TED Talk about it!”

Maya’s bus, like many others in the district,  has become a cultural mecca and safe space for students to explore their varied intellectual pursuits.

For instance, Bus 216 has housed poetry slams from 7 AM to 7:15 AM everyday since the first week of school. I sat in last Tuesday to hear a haiku about gentrification, a sonnet about the coronavirus, and a cinquain about the Democratic primaries.

During the same 15 minute period, Bus 221 has been working hard on producing an original opera about the Federal Reserve. The three act opera features catchy tunes like “What is the Federal Reserve” and “No Financial Crises.” The show will premiere in March in the Senior Parking Lot. Tickets can be purchased at the corner of Cross Road and Bradford Heights Drive.

This new surge of creative energy on school buses has caused upperclassmen who drive to school to feel excluded. “I was so excited when I got my driver’s license to be able to drive to school,” Sofie Brutsaert told reporters. “But now I feel like I’m becoming just another drone with no way to share my ideas about Herman Melville’s use of recurring symbols and motifs in Moby Dick.”

While morning buses have become renowned centers for the arts and culture, afternoon buses still consist of silent students using their backpacks to prevent unwanted seatmates.