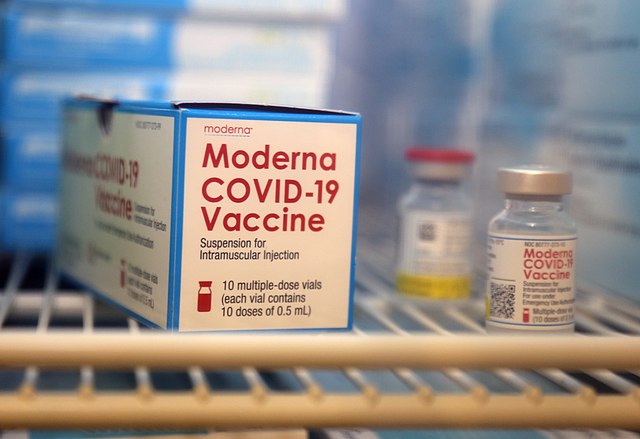 Following on the heels of the first FDA-approved coronavirus vaccine, made by Pfizer, the second vaccine, the Moderna mRNA-1273 vaccine, began distribution on December 20, 2020, beginning in the United States.  Long-awaited results of the vaccine’s trial were published on December 30 by the New England Journal of Medicine.

The Moderna vaccine follows the same biologic strategy as the Pfizer vaccine.  In general, vaccines work by teaching the immune system how to fight a certain germ.  Vaccines for most infections work via injection of a small amount of the germ, or something similar, into the body, which enables the body to learn how to fight the germ.  COVID vaccines, like those by Pfizer and Moderna, however, use a new tactic.  Specially-made messenger RNA is injected into the arm.  Once inside human cells, the mRNA finds the cell’s ribosomes, instructing them to produce the spike protein for the coronavirus.  This teaches the cells to fight the virus before ever facing the real thing.

In this large pre-approval trial, the vaccine was tested against a placebo, or fake medicine, which was really an injection of saltwater.  It was a blinded study, meaning the 30,420 participants did not know whether they received the vaccine or placebo injection.  Participants were aged 18 and above, and all were confirmed to have never had the virus before.  All participants received either 100 micrograms of vaccine or saltwater placebo in two injections, 28 days apart, contrasting the Pfizer vaccine, which had doses administered 21 days apart.

To account for cases contracted strictly after full vaccination, researchers measured confirmed symptomatic COVID cases starting 14 days after the second dose, for two and a half months.  Patients are expected to be followed for another two years.  In the placebo group, comprising roughly half of the participants, 185 contracted COVID-19.  In the vaccine group, only 11 caught the virus, equating to an efficacy rating of roughly 94 percent, similar to the Pfizer vaccine.  The researchers also looked at instances of severe illness, defined as being highly sick, hospitalized, in the ICU, or dead.  Among the 185 coronavirus cases in the placebo group, 30 were severe, while no severe cases were recorded in vaccine recipients.

To learn more about side effects in real-world large-scale populations, the CDC has started an initiative called V-Safe.  The initiative asks all willing vaccinated persons to take one short survey per day.  This is important because, while the Pfizer and Moderna studies included approximately 70,000 people, over two million Americans have been vaccinated as of January 1, with tens of millions more on the way.  If serious adverse events are reported, the CDC reaches out to those affected, collecting important information.  The hope is that real feedback will enrich the current data, helping to quell the fear and mistrust some have towards vaccines.  Recipients of any COVID vaccine can participate in the V-Safe program.

The Moderna researchers conclude that the vaccine is 94 percent effective, and that no safety concerns were demonstrated in the mRNA-1273 vaccine.  The statistics show that, like the Pfizer vaccine, the Moderna vaccine is quite promising.  With further testing and administration, more vaccines will soon follow, paving a path to recovery from the COVID-19 pandemic.

Impeachment Trial Opens in the Senate