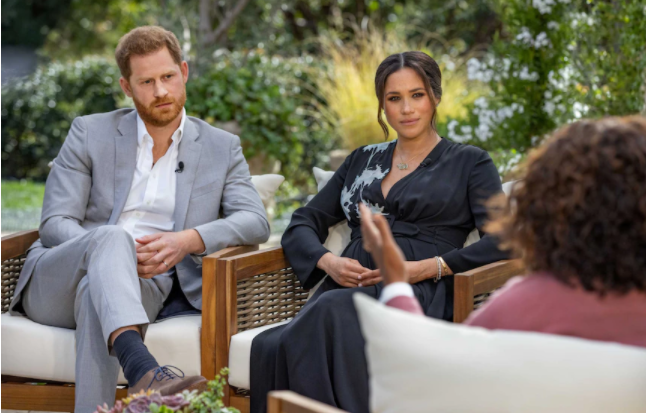 Meghan Markle, Duchess of Sussex, and Prince Harry, Duke of Sussex, finally opened up to the world, answering many questions about leaving the royal family. They recently became neighbors to Oprah, and they went to her asking to hold this interview in order to explain themselves. Oprah’s show on the CBS network interviewed Markle and Harry, on Sunday, March 7.

During the interview, Markle explained her side of the situation between her and Kate Middleton, stating, “The reverse happened.” She describes how a few days before the wedding, Middleton said/did something to make her cry. Markle then mentioned how Middleton had immediately apologized, bringing Markle flowers and a note. Markle had forgiven Middleton already, but the story came out a couple of months after the wedding. Markle said how she was waiting for the institution to take down the story, but they did nothing about it.

Harry and Markle also discussed their son, Archie: addressing conversations about the color of his (Archie’s) skin, and him not receiving a title. When they first heard the questions about Archie’s skin color, Markle and Harry were shocked. They knew discussions like this occurred in the outside world, but they didn’t expect it to occur within the royal family. “Concerns and conversations about how dark (Archie’s) skin might be when he was born came up,” Markle stated. This question was also mentioned to Harry by a member of the family. Harry stated, “That conversation, I’m never going to share. But at the time, it was awkward. I was a bit shocked.” Oprah was so shocked, she was at a loss for words. Eventually, the fact that their son wasn’t going to have a name/title came up too. “They were saying they didn’t want him to be a prince or princess, which would be different from protocol, and that he wasn’t going to receive security,” Markle said. Although she would have liked him to have a title, she was much more concerned by the fact that their son wouldn’t receive security.

In addition, Markle shared about suicidal thoughts she’d had, and how she hadn’t been allowed to receive help. She stayed home alone all day while Harry was going to work, and whenever she’d ask to go somewhere, the institution would say no. She was told she had been seen in public too much and that she needed to stay low. This caused her to become depressed and she mentioned that she started to believe she had no reason to live. “(These thoughts were) very clear and very scary,” Markle stated. Eventually, she asked the institution to go somewhere to receive mental treatment, but she said, “I was told that I couldn’t (get help) and that it wouldn’t be good for the institution.” She also mentioned how she asked a senior staff member from the institution for help, but they had also refused.

Aside from sharing about their experiences leaving the royal family, they mentioned how they’re healing. They also happily announced together that their new child (the last one they’re planning to have) will be a girl, exactly what they wanted.

Though the interview has become very controversial, it gave many insights into Harry and Markle’s experiences as members of the royal family, which had previously been unknown to the public. The full interview is on Oprah’s show on the CBS app: https://www.cbs.com/shows/oprah-with-meghan-and-harry-a-cbs-primetime-special/