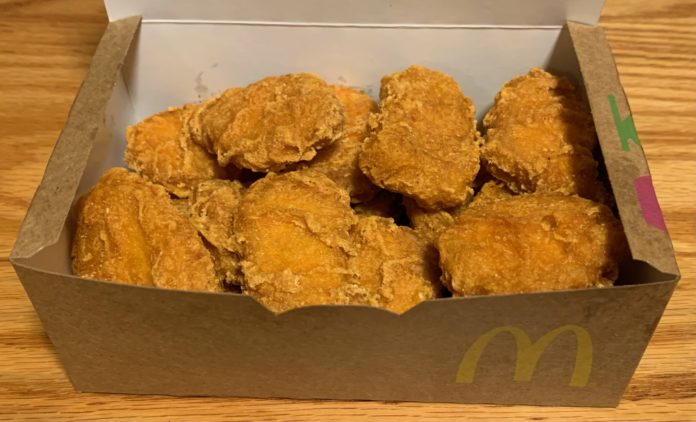 Since the introduction of Chicken McNuggets to the nationwide McDonald’s menu in 1983, there has never been a new flavor introduced.  That is, until September 2020, with the release of the Spicy Chicken McNuggets, fried in tempura and seasoned with cayenne and chili pepper.  The launch coincided with the introduction of McDonald’s Mighty Hot Sauce, which is featured in commercials alongside the nuggets, but does not come on them.  McDonald’s hopes the nuggets will help them turn around plummeting sales and income during the pandemic.  Luckily for them, the nuggets took the nation by storm.

From the start, McDonald’s billed the spicy nuggets as a limited-time menu item.  However, the nuggets sold out at nearly all restaurants about a month after their launch, a testimony to the hype surrounding them. Consequently, they were pulled from the menu briefly so McDonald’s could get more supply of them.  Following sky-high customer demand, on February 1, the nuggets returned to menus nationwide.

One of my favorite foods is Chicken McNuggets (yeah, I know, kind of sad), so naturally I had to try the spicy nuggets.  The nuggets are crunchy, and they share many qualities with the original McNuggets.  In fact, I’d excuse you for mistaking these for normal nuggets at first glance, as they are just a little bit darker in color than the original nuggets thanks to the spice, which is baked into the coating.  So how do they taste?  The short answer is: great!  The smell is deceiving, as the nuggets don’t smell very spicy, but make no mistake, they’re spicy.  McDonald’s has received backlash in the past for “spicy” items reportedly not being very spicy, but they have totally upped their game.  The heat comes in quickly after you take a bite, and it gets a bit more intense in the seconds that follow.  You can really feel the peppery heat in your throat as you enjoy these bite-sized beauties.  When you remove the spice from the equation, they taste just about the same as the standard nuggets, if not a little more subdued.  I can’t fault these nuggets for too much, but I will say the spiciness carries the nuggets so much that the flavoring takes a backseat.  One thing I noticed is that by the time I got to about my tenth nugget, there was a bit of a weird aftertaste of pure pepper that I didn’t enjoy.  However, this is a taste I’ve experienced in my throat with many spicy foods, so it’s no worse than the others.  I tried the nuggets with a vanilla milkshake and some water.  I noticed that the milkshake actually seemed to bring out the spice even more, while the water did a better job at combating the spice, at least for a brief moment.  If you’re a spice aficionado, you’ll likely appreciate the decent level of spice on offer here, and even if you’re not, they aren’t too spicy to handle.

The fast food critics and reviewers generally agree with my sentiments about the new spicy nuggets, stating that they have a mild kick, but nothing crazy.  Reviewers also noted how crunchy and flaky the nuggets are, and they all compared them to the original nuggets, as they really are quite similar.  The Mighty Hot Sauce, however, received mixed reviews.  Supporters claimed it added awesome heat to the already-spicy nuggets, with some even comparing it to sweet and sour sauce with extra heat, while critics stated it tasted of too much vinegar and corn syrup.

Reviewers just can’t seem to 100% agree on the new Spicy McNuggets, so you should try them and form your own opinion!  I can definitely recommend them, although I personally prefer the normal nuggets, simply because the flavor is a good baseline for sauces like ketchup.  I recommend you eat the spicy nuggets without extra sauce, unless you’re feeling adventurous.  McDonald’s even dares customers to dip them in the Mighty Hot Sauce in their ad campaign, and I can only imagine how spicy that would be.  In my opinion, these nuggets live up to the hype, and you should absolutely taste them before they eventually leave the menu again.  Or who knows?  While the nuggets are still a limited-time item, maybe McDonald’s will keep the nuggets around forever if that’s what customers demand.

Danny’s Steaks is Bringing the Philly Cheesesteak to Syracuse