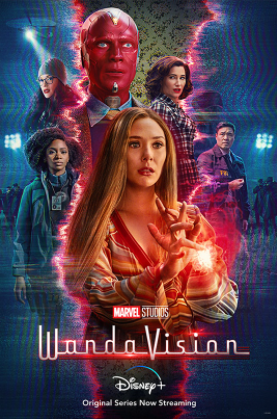 Please note: The following article doesn’t contain any spoilers for WandaVision, but it does reference events that take place preceding the series. That means spoilers for movies like Avengers: Endgame will be included.

Who would have thought that following a run of 23 cinematic full-length movies, Marvel would turn to a sitcom-style television series? I don’t think anyone did, but surprisingly, it works.

Following the events of Avengers: Endgame, this show bizarrely begins in seemingly the 1950s, in black and white and everything. The last time we saw Wanda, she was solemnly attending Tony Stark’s funeral after the final battle with Thanos. Even weirder, the last time we saw Vision, he was dead. Now, they’re walking into a house as a married couple, seemingly unaware of anything to do with their lives. How is that even possible?

Eventually, that question is answered, but it takes a rollercoaster of a show to get there. The path through different eras of television tells Wanda’s and Vision’s story through an interesting lens. But don’t be discouraged by the first few episodes; there is just as much action as any other installment of the Marvel Cinematic Universe.

The acting in the show is some of the best throughout the entire MCU. Paul Bettany is absolutely fantastic in his role as Vision, and he adds such complexity and emotion to a character that is literally a robot. His counterpart, Elizabeth Olsen as Wanda Maximoff, is able to display the growth of her character so well.

Appearances by other smaller characters that you would never expect to see in this show make WandaVision even better. Adding more context and story to Jimmy Woo from The Ant-Man and the Wasp, Darcy Lewis from Thor, and Monica Rambeau from Captain Marvel is a great contrast from the protagonists that we already know so well.

One of the biggest bright spots in the show is how much the show lives in the gray areas when it comes to morality. What is right and wrong? What is a fair excuse to lash out? Who even is the real villain? These are questions that the show doesn’t answer, and allows for the viewer to decide for themselves.

WandaVision truly has something for everyone. Even if you get a little bored by the first episode or two, I would highly recommend that you just trust the process and keep watching. By the end, almost everyone who has seen it has enjoyed it, no matter what type of shows or movies you enjoy.

Keep in mind that this show sets up major plot points for the next several Marvel movies, so if you’re going to be seeing the next installments of Dr. Strange, Spider-Man, or Captain Marvel, then WandaVision is a must-watch.

All nine episodes of Wanda-Vision, plus a great behind the scenes look at the making of the show, are available to watch on Disney Plus.

The 10-Year Anniversary of the Musical Template for Your Favorite Modern...