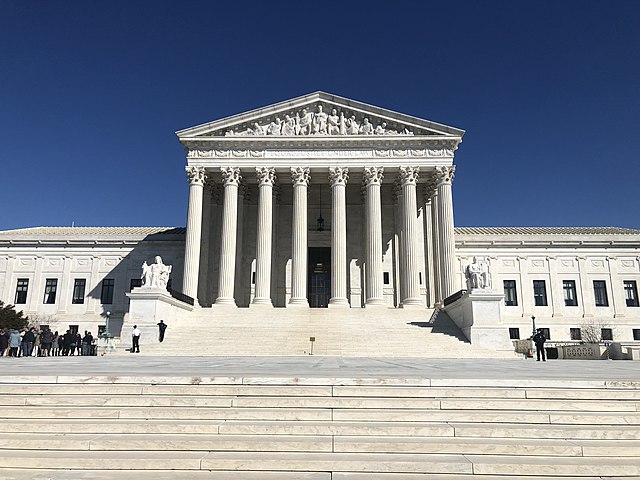 Mahanoy vs B.L. (Brandi Levy) is a Supreme Court case that will decide if the First Amendment protects off-campus student speech from in-school discipline. Levy, a freshman at Mahanoy High School, PA, was cut from the varsity cheerleading team and instead put on the junior varsity team. Outside of school, she relieved her frustration by posting a picture on her Snapchat story with her middle fingers up and the caption: “F*** school f*** softball f*** cheer f*** everything.” Some students on the cheer team screenshotted the post and showed it to the coach who got visibly upset by Levy’s comment. In retaliation, he suspended Levy from the junior varsity team for a year for violating a rule which stated that type of speech as punishable. Levy and her parents were outraged and took the school to court for violating the First Amendment right to freedom of speech, claiming the school policy cited for her suspension was unconstitutionally vague. The case kept escalating throughout the lower courts and had its first hearing at the Supreme Court level on April 28, 2021.

While this may seem like a fairly modern issue, there is some precedent for this type of case. The most popular case for student free speech was Tinker v. Des Moines. Mary Beth Tinker and some of her friends/siblings decided to wear black armbands to school in protest of the Vietnam War currently going on. When the school suspended them for refusing to take the armbands off, Tinker’s parents took the case to court. In a monumental decision for free speech, the Supreme Court decided in a 7-2 majority in Tinker’s favor. The most famous quote to come out of this case came from Justice Abe Fortas, who said, “It can hardly be argued that either students or teachers shed their constitutional rights to freedom of speech or expression at the schoolhouse gate.”

However, this is not the only case that has precedent over Mahanoy v. B.L. Hazelwood v. Kuhlmeier is the other case bound to be mentioned during the hearings. When the Hazelwood school newspaper was ready to print a new edition, the school board had an issue with two of the stories. After refusing to remove them, the paper was not allowed to be printed/distributed. The parents of the students in the newspaper took the case to court for censorship of the press/suppression of free speech. In a 5-3 decision, the Supreme Court decided that because the newspaper was school-sponsored, they were allowed to delete certain articles they deemed would cause disruption in the school day/school environment.

In the initial hearing, the Mahanoy Area School District argued that since the post on social media by Levy was about the school, they could discipline her. They believe that schools have the right to regulate speech that could cause disruption in the school day (as the precedent set in Hazelwood), whether that speech occurs on campus or not. They further argued that schools are required in many states to combat cyberbullying; how can this be done if schools can’t discipline students for speech outside of school?

Levy’s lawyers interpreted things differently. They argued that Levy was well within her constitutional rights with what she said. Although the speech may be deemed inappropriate and offensive, freedom of speech protects her. In addition to this, they argued that if this was punishable by schools, students would constantly be wary of what they say. If a student was recorded saying something politically incorrect or posting something controversial, under a ruling with the school, they could be punished for it. Is it an appropriate environment for students to have to grow up having to watch what they say every day (including weekends and breaks) in fear of being punished by their school?

A few of the justices have come out with statements that can help us figure out where they stand on the case. Justices John Roberts and Samuel Alito both expressed their concerns with the power schools would hold if the court sided with Mahanoy. Roberts said, “[About the rule that schools have power over anything that targets the school] I worry about how it would be implemented. If schools are going to have any authority under Tinker outside of school [the rule needs to be clear].” In addition to this, Justice Elena Kagan is worried about what could be considered “school speech” in the future. She saw the post as pretty generic in content, so it would allow schools to take control of a lot more speech than may be intended, if a ruling was made with Mahanoy. Justice Sonia Sotomayor, on the other hand, is worried about how schools would be able to deal with cyber-bullying if the court ruled with Levy. However, she did express that she’d like to see how Levy’s post actually disrupted the school day. Justice Brett Kavanaugh had a very interesting take on the subject. His current view is to create a general guideline for schools to follow, then send the case down to a lower court for a verdict.

Overall, this is an extremely important Supreme Court case that will affect every student’s life. It is unclear what the outcome of the case will be at this time; we will have to wait for more hearings and statements from justices before the outcome can be accurately predicted.

What is Going on With the Construction in Downtown Syracuse?

A Timeline of The Coronavirus By Jacob Marshall